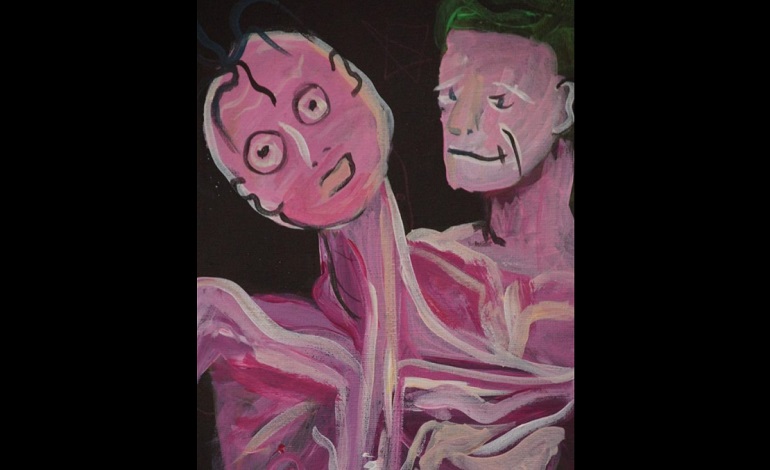 An exhibition of abstract art in the centre of London is tackling what it’s like to be human, head-on. Condition is a collection of work by the artist and charity founder Michelle Baharier. And it doesn’t shy away from dealing with political and social conventions and issues.

Audacious substance from a young age

Baharier is a multi-discipline artist, working in the mediums of both visual and performance art. Condition is a collection of small art pieces, drawings, photographs and montages. And with striking visuals and audacious substance, the exhibition deals with the whole spectrum of humanity. But challenging ‘normal’ conventions is nothing new to Baharier. As she told The Canary, her route into art was far from normal:

When I was about four-years old I started doing collage, making things with corrugated cardboard. I didn’t get any formal qualification at school, so I went to my nearest art college and took them all the clothes that I’d made, the knitting that I did, and they let me in. I then went and did a degree, then an MA. In those days it was funded, so I didn’t have to take out a student loan, I actually got a grant… Plus, I was one of the first people to do an Erasmus – where you do a student exchange in Europe. I went to Italy and Germany, where I studied. It was a really, really brilliant opportunity

Much of Baharier’s work in Condition deals with portraits. The faces of the subjects, while obviously human, have an other-worldliness about them. In some cases, almost Faustian. Eyes bulge, discoloured or over-coloured; mouths are skewed and stretched beyond recognition; the skin is never flesh in hue, often green or draped in shadow so no colour is really discernible, and you get the feeling of vacancy. While most of the subjects are, at first glance, emotionless, with all the portraits there’s a sense of something deeper going on. And it’s Baharier’s particular focus on the portraits’ eyes which draws the audience to this: 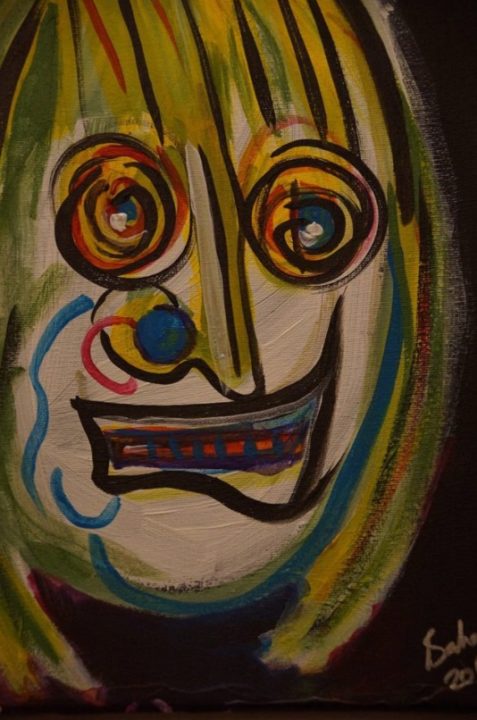 You’re immediately drawn to them, partly by her use of colour, but also because of the over-accentuation. And with many of the faces, there’s an inherent sadness, trauma or resignation behind their eyes. Baharier gives the audience a glimpse into the subject’s emotional, mental and spiritual states. Sadly, this is not always pretty, but as Baharier said:

For me, it’s a bit like spewing up my guts, really. And if it works, how people respond to it, then that’s brilliant. Letting people have an emotional response to it, is what’s most important to me.

There’s a distinctly Gothic feel to some of her work: 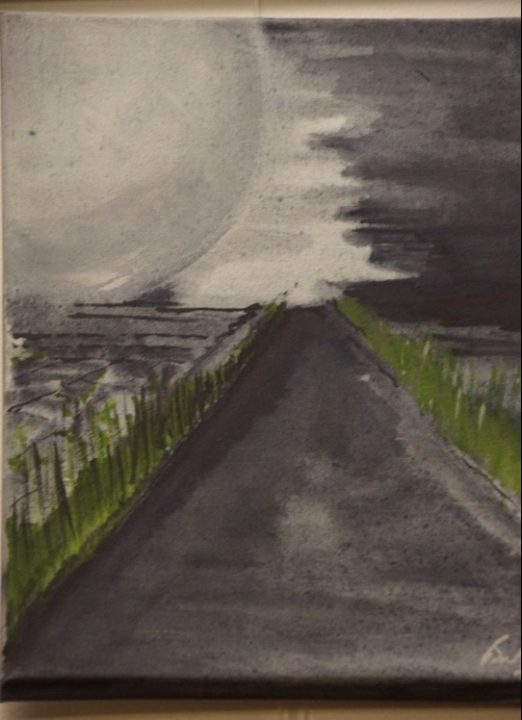 A full moon is the focal point of several of her pieces, with meandering paths winding into the distance, only to be lost, shrouded by pitch black, foreboding night skies. For me, Baharier was saying something about the very essence of the society we currently live in; with the far-right on the rise across the world, economic chaos always menacingly hovering in the background, and climate change a clear and present danger. And this is what Baharier was trying to visualise:

I feel like we live in really dark times at the minute. Nothing good is happening, people are scared and worried about the future.

One piece in particular stood out for me: 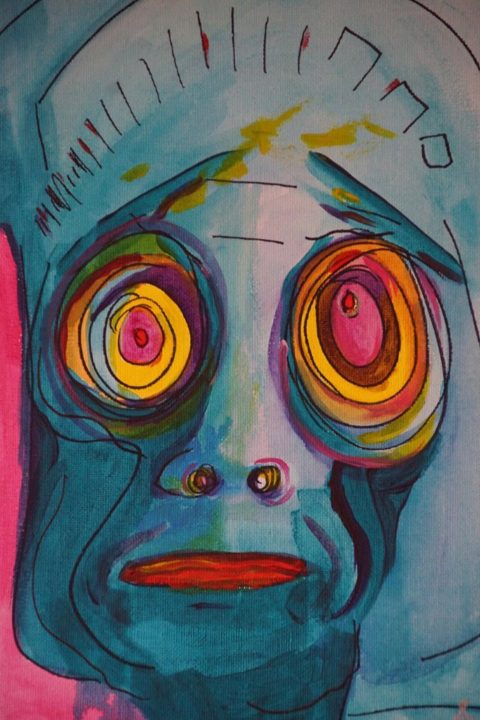 To me, it is very obviously a representation of the Statue of Liberty. But it’s almost as if the iconic landmark is terrified. Scared for the future of her country? Of a society teetering on the edge? Either way, once again with the focus on the eyes and the distorted face, there’s a sense of panic and horror to the work. Baharier said of the piece:

Again, it’s a representation, and it just came to me one day. We all know these iconic symbols, and they never change. But society around them does, and at the minute, it’s really worrying what’s happening in the US.

Talent should be nurtured

Baharier realised young in life that she had a passion for art. As she told The Canary, she feels that her generation was one of the last ones to really have the opportunity to develop its talents, artistically, in the education system:

Unlike now, back then everything was funded. I consider myself to be from a working class background, and I don’t know if people like me could do that now. We could be losing the best talent because of the lack of funding. We don’t know what we’re losing.

It’s not only paintings that she creates. Photography is also very important to Baharier. She told The Canary she doesn’t have a preferred medium; that whatever platform she works on it’s reflective of how and what she’s feeling at the time.

An exhibition for all

Baharier uses hearts as a repeated theme in Condition. It’s noticeable that on several pieces it’s ambiguous whether the subject matter is actually a butterfly or a heart; Baharier said this was intentional. For her, hearts are a metaphor for our emotions. “We feel pain in our stomach when we’re upset”, she says, “but we always refer to it in terms of our heart. I think it’s something everyone can relate to.”

Baharier hopes that people will take something from the exhibition; that they’ll relate, be touched or be moved. And her art certainly does that. By combining a passion for social egalitarianism, and a real skill of being able to convey feeling via her work, Baharier has created something special. An exhibition that will make you feel, question and think.

– Support The Canary, so we can keep bringing you the voices of artists others won’t.