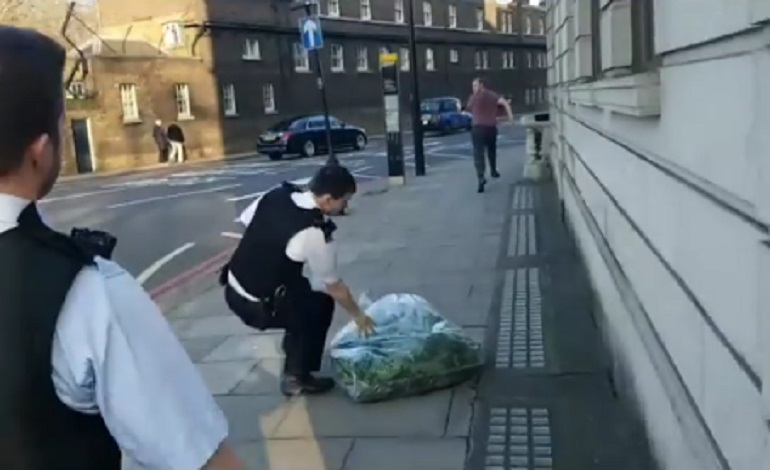 The Metropolitan Police have raided a substantial cannabis factory in the heart of London. But in a bizarre twist, a group of anarchist homelessness activists spotted the Met operation and filmed the whole thing. And it was at an exclusive property just around the corner from Buckingham Palace.

The raid by the Met took place at around 7.45am on Friday 17 February. The Autonomous Nation of Anarchist Libertarians (AN), who are currently occupying 4 Grosvenor Gardens as a homeless shelter, got word of the raid. And they promptly went down to film it.

AN told The Canary:

AN counted around 33 bags of weed coming out but we weren’t present the whole time. We overheard police saying it was a £500,000 op. Initially, there were around four uniformed cops keeping security, two out two in, maybe a number more who are specialised drug officers dismantling equipment and so on. Lots, lots more arrived afterwards, including SCO19 armed police. The house was vacant by all accounts.

AN have been occupying 4 Grosvenor Gardens since 1 February. A court granted an eviction order for the owners of the building. But it emerged that this was just for the land, not the actual building. So for the time being, the AN occupation continues. The group has been holding art and T-shirt printing workshops, as well as offering food, shelter and even haircuts for London’s homeless people.

It is unclear who owns the cannabis factory house. The Met Police told The Canary:

On Friday 17 February, at around 10.00am, officers… executed a warrant at 1 Grosvenor Gardens, SW1.

Three men were arrested attempting to flee the address. Over 600 cannabis plants and associated drugs and paraphernalia were found in the premises. The three arrested were subsequently charged for cultivating cannabis.

At around 1530hrs on the Saturday a male attempted to steal an evidence bag containing suspected drugs from a police vehicle at the scene. An officer… posted at the scene chased the suspect who subsequently dropped the bag and made off. The officer recovered the evidence bag but was surrounded by a group of people and was assaulted sustaining a facial injury. Fortunately the officer did not require hospital treatment.

There has been no arrest regarding the theft of evidence or the assault on police.

While the Met allege that an officer was assaulted, the video from AN appears to contradict this. But whatever happened, the incident goes to show that no matter what part of the country you’re in, cannabis is big business. Even right next door to the Queen.