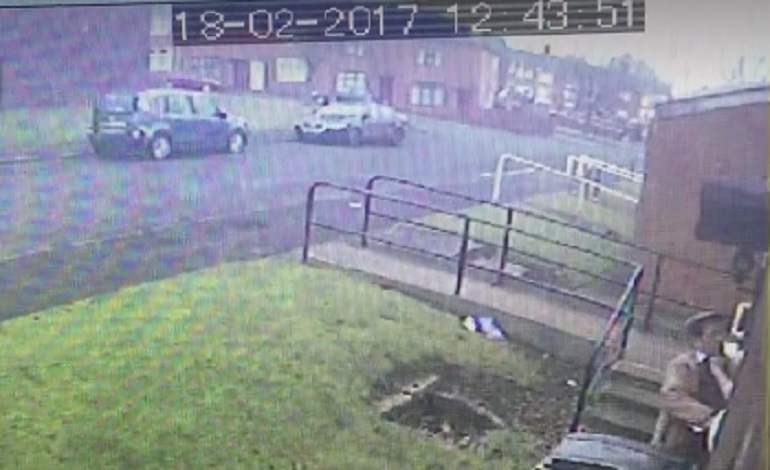 Yet another scandal has hit Paul Nuttall’s election bid in Stoke Central. An elderly woman caught a UKIP canvasser urinating on her house. To make matters worse, the man also tried to force his way into the widow’s home. But unfortunately for UKIP, the pensioner had CCTV, and she caught the incident on film.

On Saturday 18 February, Marjorie Pinches from Northwood in Stoke-on-Trent noticed a Nuttall/UKIP campaign leaflet drop through her letter box just after 11.40am. But after glancing at her CCTV, she saw the unnamed canvasser urinating on the side of her house. And what happened next was shocking. Even by UKIP’s standards. The canvasser tried to push his way into the house.

It’s been almost five years since I lost my husband and I am very dubious about opening the door, that’s why I have got these cameras.

The Canary spoke to Steve Pinches, Marjorie’s son. He said:

The incident has really shaken my Mum up. And left her quite distressed over it. I spoke to her first thing on Sunday and she said it’s upset her. Labour also came knocking and she was frightened to open the door.

The alleged incident happened on the day of Marjorie’s 73rd birthday party.

Steve contacted the local UKIP branch. He said it had apologised.

But Marjorie has also alleged that she was injured in the incident. Her son told The Canary that the door had hit her right leg. And that she has been having pain in it since.

A 78 year old party member who recently had treatment for prostate problems was caught short while leafleting. He found what he thought was a quiet alleyway and relieved himself. However, a local resident saw him and was understandably annoyed. The member was mortified and tried to apologise.

I am truly, truly sorry for the upset I caused this resident. I can only apologise. It’s very embarrassing and I can only pass on my deep regret.

Social media users were not impressed:

We are not going to take punitive action against a 78-year-old member with prostate problems.

A spokesperson for Staffordshire Police said:

We attended [the incident] and we have got an officer dealing with it. We will be investigating.

With this latest scandal, it would appear Nuttall’s bid to win in Stoke Central may be coming off the rails. And with Labour still the odds-on bookies’ favourite, the UKIP leader probably wants 23 February over and done with.

– Support The Canary, so we can keep bringing  you the news that matters.