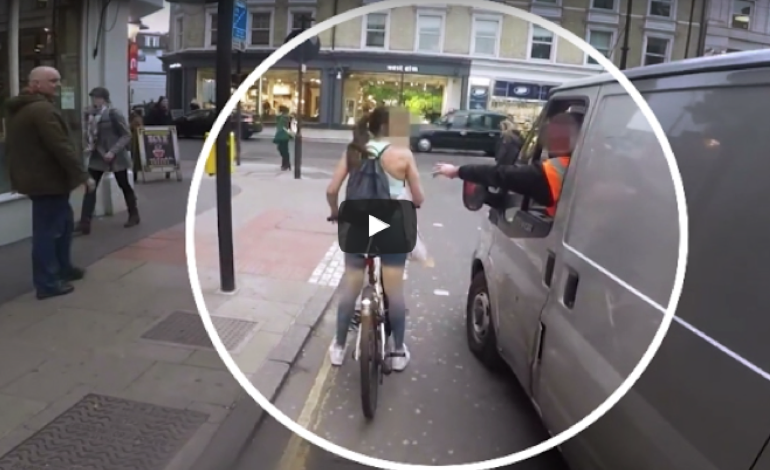 Footage of a female cyclist bringing karma to a white van man who harassed her on a busy London street might well have been staged. Eyewitnesses to the event claim to have seen the ‘actors’ rehearsing the scenes several times, and the production company responsible for its release has given a cagey response when asked for comment.

The footage is shot on Goodge Street and Tottenham Court Road in London, and was filmed by the dashcam of an unnamed motorcyclist. A female cyclist is seen being sexually harassed by a man driving a white van, and when she rejects his advances, he follows up with insults and more harassment. But she doesn’t let him get away with it.

First, the female cyclist slaps at the window of the van. The driver responds with:

That’s not very ladylike is it, eh? What charm school did you go to, eh? You wanna tell your mum and dad to get their f*cking money back.

The woman appears to shout something back at the man, and he responds:

Shut up you old dog. You on your period?

Yet almost immediately after the barrage of insults, he returns to demand her number and arrange a hook up which she is clearly not interested in. The cyclist raises her middle finger and sets off after the van when it pulls away form the lights.

The female cyclist catches up to the van, and takes a firm grip of the driver-side wing mirror. She pulls on it until she separates it from the van, and tosses it on the floor. She then cycles off. The motorcyclist filming the incident then pulls up alongside the stationary van and shouts at the men inside:

That’s exactly what you deserve, you scum.

A female cyclist exacted her revenge on a cat caller in a van who pestered her at a junction by chasing after him and ripping off his wing mirror.

The incident in London was caught by a GoPro camera attached to the helmet of a nearby moped rider.

Believing the footage to be real, thousands shared it on social media. With enthusiastic responses.

"That's exactly what you deserve you SCUM!" 😂👏🏽 That lady made every decent person watching this clip proud. https://t.co/rVRvWuQiLK

But it turns out the scenes may have simply been staged. As The Metro reports:

A witness has now told The Sun that they saw 26-year-old James Bolding, who co-owns Jungle Creations, giving instructions to actors beforehand.

Scott Deane, a builder, told the paper he was working across the road when he saw this ‘very attractive girl with a bike’ talking to Bolding, who was giving her instructions.

The actors apparently then practiced the scene a few times, before getting the final shot – by which time the wing mirror was already quite loose.

When asked for comment, Jungle Productions told The Metro:

As a company we’ve known them for a few years, but never really licensed videos from them.

It appears this may be another case of fake news.