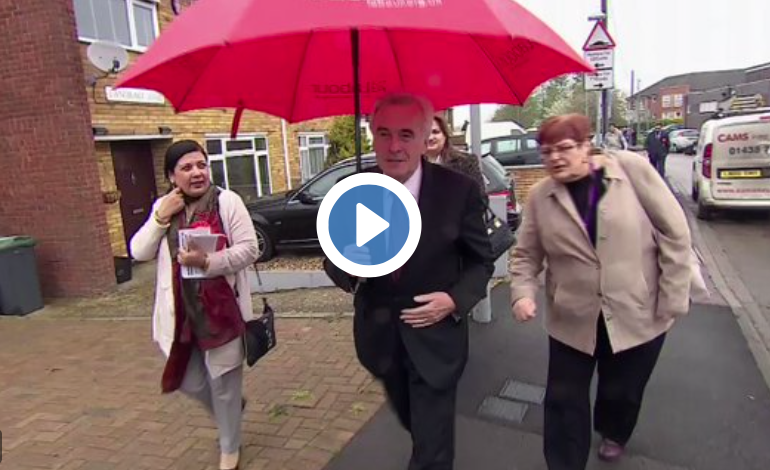 John McDonnell could be the Chancellor of the Exchequer in a few weeks. And if his campaign video is anything to go by, the UK is in for a pleasant surprise. For the first time in a while, we have a politician who can actually do human.

While watching the footage of McDonnell strolling the streets in which he grew up, people noticed something bizarre. The Shadow Chancellor didn’t have to work hard to be human. Unlike Theresa May’s Chancellor Philip Hammond, who fails to even approximate humanity.

Unlike nearly 48% of his Conservative opponents, McDonnell didn’t grow up in private school. He was born in the slums of Liverpool, until his family moved South for work. His dad was a dock worker, and his mum spent 30 years working at retailer BHS. He speaks about the difference council housing made to his family:

We moved into our first council house. We had our own bedrooms for the first time. And we had a garden front and rear.

It was a great, great day of celebration when we moved into that council house. And all of this was as a result of a Labour government.

Speaking to how much opportunity was afforded him by the welfare state, McDonnell says:

Everything that Labour governments have done to improve the lives of working people, is under attack by successive Tory governments.

We shouldn’t have a situation where people are having to go to food banks. And we shouldn’t have children living in poverty on the scale that we do, even though their parents are in work.

What is he going to do about it?

If Labour win on 8 June, the Corbyn government is aiming to recreate the housing boom of former Labour PM Clement Attlee. The Secure Homes Guarantee reads:

We will build a million new homes in five years, with at least half a million council homes, through our public investment strategy. We will end insecurity for private renters by introducing rent controls, secure tenancies and a charter of private tenants’ rights, and increase access to affordable home ownership…

This isn’t about finding new money. It’s about changing how we spend it. The taxpayer money currently spent on renting housing from the private sector will be used to build and maintain council housing instead. This also means rents can then be kept down, because the state isn’t looking to profit from that housing.

The Attlee government built more than a million homes between 1945 and 1951, with 80% of them council houses with subsidised rents. This, and subsequent commitments to social housing policy, meant that by 1975 over 80% of government spending on housing went on the capital investment on the supply side (building and maintaining social homes).

In stark contrast, from Margaret Thatcher’s ‘Right to Buy’ scheme on, these numbers reversed. By the year 2000, 85% of government spending on housing went on the demand side. Much of this goes on housing benefit to private landlords who have used the housing shortage to hike rents.

This means that instead of spending taxpayer money to build and maintain homes, we are using it to pay out dividends to private landlords.

Today, 40-50% of the £23bn we spend each year on housing benefit goes to private landlords.

It’s time for a new approach

The UK has spent too long under right-wing governments who know the price of everything and the value of nothing. It’s about time we had some grown ups in Downing Street.