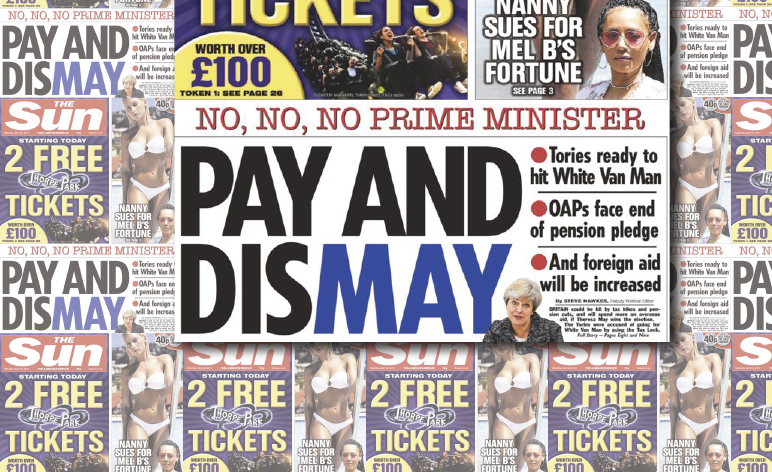 Theresa May has made some erratic decisions in the few short days since the snap election was called. And a tabloid newspaper that’s usually closely allied with her is picking those decisions apart. Namely, The Sun.

But could the timing be linked to Rupert Murdoch’s Sky deal potentially unravelling? 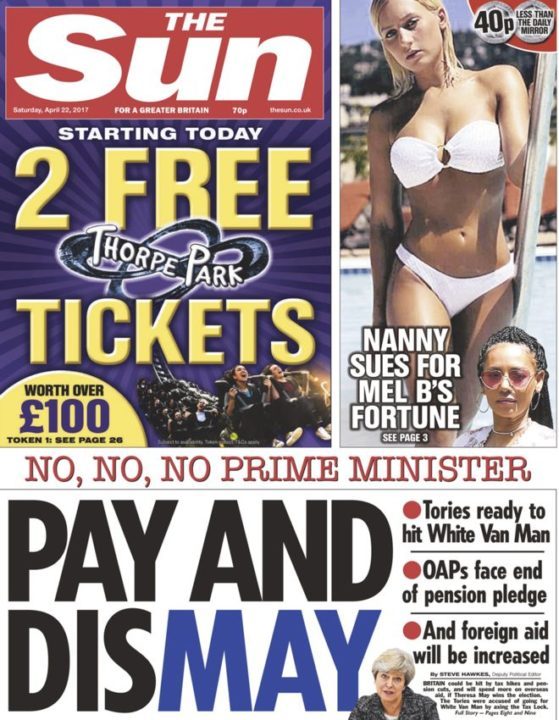 People over 65 are a key group for the Conservatives. The Tories attracted 47% of their vote in the last election. This is doubly important because 78% of people over 65 voted, and the UK has an ageing population. And they’re also important to newspapers, as people over 65 generally represent the largest age bracket of their readership.

The problem The Sun has with May is that she has refused to commit to the ‘triple lock’ on pensions. This ‘triple lock’ means that pensions rise in line with whatever is highest for price inflation: 2.5% or average earnings growth. Labour, meanwhile, have committed to maintain it until 2025.

And The Sun‘s “White Van Man” angle refers to the government not repeating 2015 promises that it would not raise taxes. Before the election was called, Labour announced plans to help small business owners by targeting bigger corporations who withhold payments.

Furthermore, not decreasing aid spending is seen as an attempt to woo people who might defect to the Liberal Democrats. It’s popular with Tories like George Osborne, but less so with many traditional supporters.

Ben Harris-Quinney, the chairman of The Bow Group, which is the UK’s oldest conservative thinktank, stated:

Whatever the polls say no political party can take support for granted and should always look beyond the short term.

Committing to continuing to spend 0.7% of GDP on foreign aid whilst refusing to rule out tax hikes across the board is exactly the sort of manoeuvre that can turn a great victory to dust.

Although Murdoch and his outlets are seen as being supportive of the Conservatives, it’s important to remember why. It’s not merely because he likes the cut of their gib. It’s because he expects a return on his investment. And this is why he was just as comfortable supporting Tony Blair’s Labour as David Cameron’s Tory/Lib Dem coalition.

But what does Murdoch want right now?

For a start, he will want the Tories to commit to a manifesto that he can sell to his audience. But he also wants to takeover Sky. A move which he attempted in the past, but that came undone as a result of the phone-hacking scandal.

The past is important, as history could be repeating itself. Because just as his latest Sky deal seemed to be moving ahead, Murdoch’s empire was hit by another scandal. This time allegations of rampant sexual harassment at Murdoch’s Fox News. Allegations which have been buoyed by a recording of the now fired host Bill O’Reilly making unsolicited and sexually inappropriate phone calls. And allegations which some claim have been systematically kept quiet for years by 21st Century Fox.

No matter what the motivation, it’s important to remember that this general election is going to be a 200m sprint. Any stumble could ultimately lose the race. And May being pitted against her key voters is a massive stumble for the Conservative party.

As such, The Sun could have made one of its biggest miscalculations yet.

– You can also support and read news outlets that hold the powerful to account. Here are some we recommend. Please add more that you like in the comments: