We compared the Tories' policies to a BNP manifesto. And bloody hell [VIDEO] - Canary 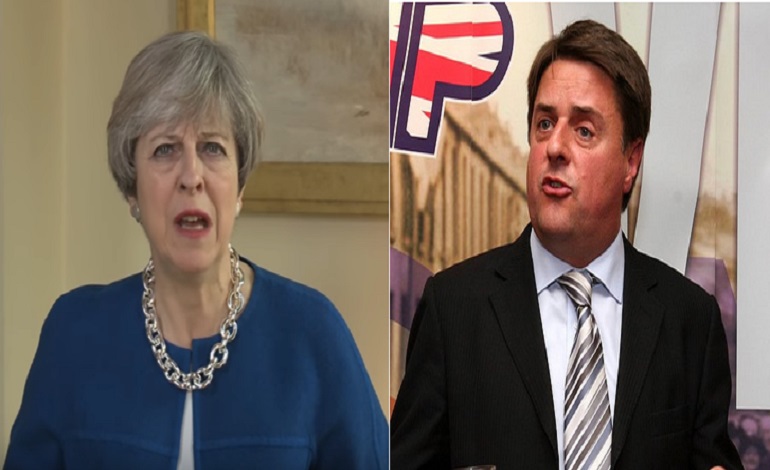 Theresa May has refused to take part in televised leadership debates for the general election. And one reason may be because she knows her government’s policies and record would not stand up to scrutiny. But one journalist did scrutinise the Tories’ policies – comparing them to those of the British National Party (BNP) in 2005, under then leader Nick Griffin. And the results are shocking.

Craig Murray is an author, broadcaster and human rights activist. He was British Ambassador to Uzbekistan from August 2002 to October 2004. And in a recent article, he asked “Can anybody find any significant difference between May’s policies and the BNP manifesto of 2005?” Murray noted that both the Tories and the BNP advocate:

So, The Canary took a closer look at the BNP 2005 manifesto. And it found that there were more similarities between Tory policy and BNP pledges. But also that the latter was actually far more left wing than the current Conservative government.

On top of what Murray noted, The Canary also found that the BNP:

The BNP also called [pdf p.22] for “commitment to the values of traditional… Christianity”. Much like May’s Easter message:

…alert a future generation to the fact that, as is the way of the world, a ruling class has arisen that has once again come to think of itself as more important than those in whose name it governs.

But here’s where the BNP began to differ from the Tories.

It included the following section [pdf p.8] in its manifesto on “Dismantling the repressive State”: 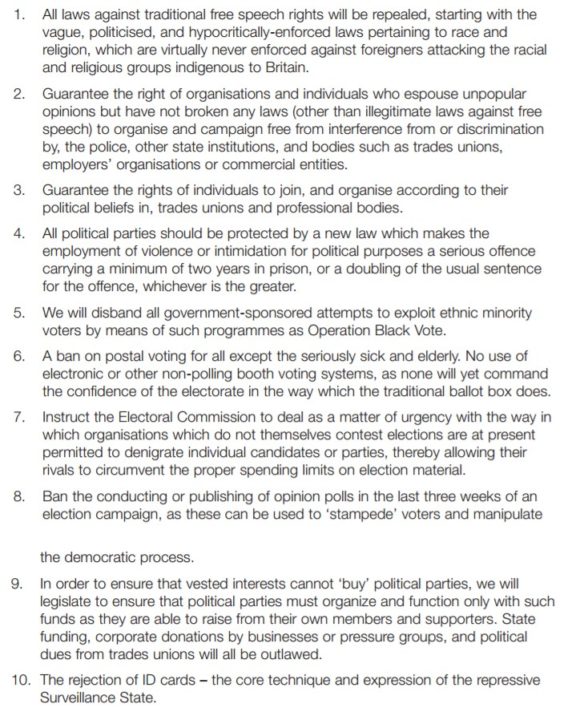 And compared to May’s proposed Counter-extremism and Safeguarding Bill, it seems quite liberal. The bill was to include:

…new civil orders to ban extremist groups, restrict the behaviour of extremist individuals, and to close down premises used for extremist purposes. The Bill would also provide Ofcom with powers to censor extremist content, and enable employers to conduct checks on employees for involvement in extremism.

But Index on Censorship criticised the bill, which it said could have ended up “silencing us all”. Simon Calvert of the Christian Institute warned that the bill could make the type of people labelled as “extremist” “a whole lot wider”. Index on Censorship also said that it would “threaten free speech”, and that its civil liberties orders were “draconian measures”:

We should resist any attempts to make it a crime for people of faith to talk publicly about their beliefs, for political parties to voice unpopular views, and for venues from universities to village halls to host anyone whose opinions challenge the status quo.

The BNP manifesto also called for the following:

The Tories and the BNP: separated at birth?

Let’s be very clear. The BNP did not base its 2005 manifesto on some left wing, egalitarian ideology. It was manipulating the public, based on racist, nationalist beliefs that advocated a hatred of anyone who differed from its white, supremacist ideals. But the BNP manifesto shows how far the mainstream political debate has shifted to the right. What were once considered extreme, fringe views have seeped into ordinary political beliefs. And the current Conservative government shows how far-right views can be sold to the public as trying to build (as May said) a “stronger, fairer Britain that truly does work for everyone”.

So don’t be fooled. May and Griffin are closer in their beliefs than you think.