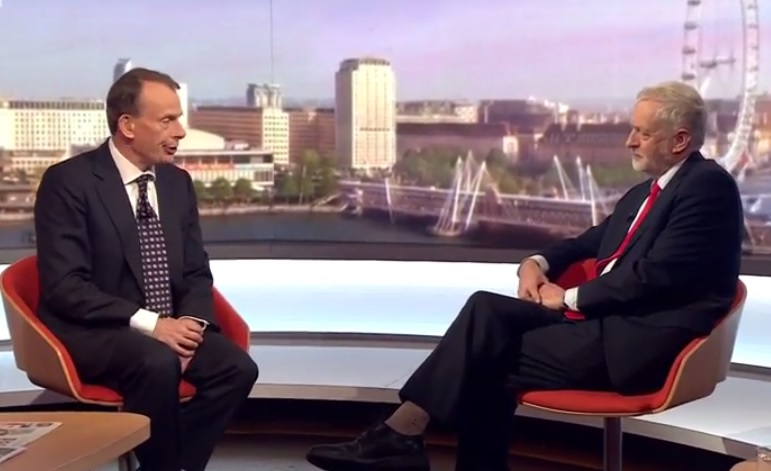 Jeremy Corbyn appeared on The Andrew Marr Show on Sunday 23 April. And in the course of what was at times a hostile interview, Marr made an important admission: that the mainstream media is biased against Corbyn.

You are up against it in this campaign… you’ve got a lot of hostility from the mainstream press and all the rest of it. You’ve seen all the headlines…

It’s not just the headlines

But it’s not just the print media. The BBC is well known for its bias against Corbyn. And Marr’s interview was no exception. Marr jumped quickly into asking about Corbyn’s stance on nuclear weapons. And while it is a fair question for a leader of a political party, Marr’s approach was hostile. He asked:

… if you win the election and you walk through the doors of Downing Street, almost the first thing that happens is that you’re tapped on the shoulder by a senior civil servant who takes you off to a room to write four letters to the captains of Britain’s nuclear submarines… instructing them what to do… what will you be telling them?

… I want us to achieve a nuclear free world… what I want us to do is adhere to the nuclear non-proliferation treaty… and crucially, immediately, promote the six party talks on the Korean peninsula as a way of deescalating nuclear tensions around the world.

But Marr kept pushing him as to what he’d put in his letters. In response, Corbyn said:

As Twitter users pointed out, there seemed to be a loaded priority in the questions about how eager Corbyn would be to kill people:

A different type of politics

But Corbyn’s calmness in the face of Marr’s questions, on both foreign or domestic policy, was something many Twitter users picked up on:

In my opinion I thought Jeremy Corbyn handled Andrew #marr very well. Once you strip back these interviewers agenda, he's optimism! #BBC

Great interview by @jeremycorbyn on #Marr despite poor questioning. No wonder May is running scared from debates. #VoteLabour #GE2017

And generally people were impressed with the way he handled himself:

Jeremy Corbyn was an absolute breath of fresh air on #Marr – a man offering real reform & a country to be proud of. He's leagues above May.

There are undoubtedly many barriers Corbyn needs to overcome if he is to win this election. And the bias and hostility from the mainstream media is one of the major ones.

But Corbyn is appearing calm, collected and thoughtful on a range of issues. So perhaps people are beginning to see the alternative he is offering; a chance of turning this desperate society of inequality around.

And the relaxed way he handles hostile interviews, and the ease with which Corbyn conducts himself with the general public, may explain why Theresa May is running scared from having TV debates.

We have just under seven weeks until the election. And it’s possible to change our society for the better, rather than our present one that exists to profit a self-serving elite. Let’s do this.