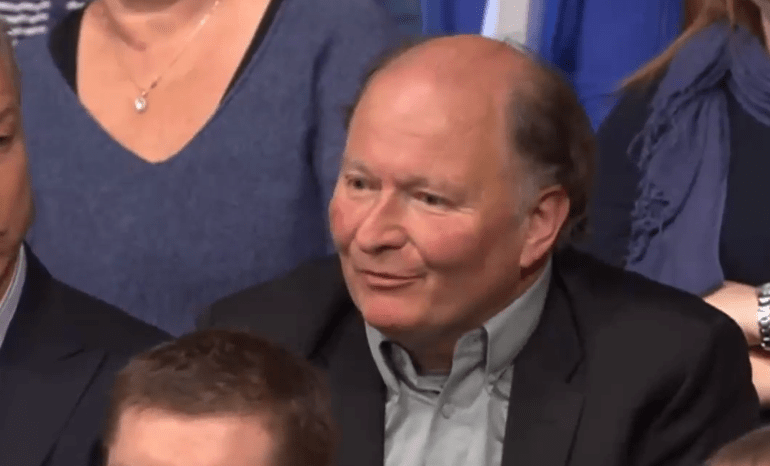 This audience member says he bet his wife Damian Green would say 'coalition of chaos' tonight and calls for a more grown up debate #bbcqt pic.twitter.com/uqMgb6wCju

The audience member said he’d bet his wife £10 that Work and Pensions Secretary Damian Green would say “coalition of chaos” and “strong and stable government” during his first contribution. It might be the easiest £10 he’s ever earned.

The Conservative campaign so far indicates that his wife was up against terrible odds. During an interview with Radio Derby, Theresa May epitomised this. Host Chris Doidge asked the Prime Minister if she knew what a ‘mugwump’ was. Boris Johnson had used the word to personally attack Jeremy Corbyn earlier that day. Then, like a robot, May responded:

The collective face-palm was tangible. Journalists from The Sun and The Guardian alike expressed utter disbelief. The mindless catchphrase only highlights the Prime Minister’s inability to defend her party’s record:

Hold on. Given the Conservative government’s unflinching support for Donald Trump, people may wonder which party represents the true ‘coalition of chaos’. Earlier this month, Trump unilaterally launched airstrikes at Syria. Without congressional approval. Despite zero reliable proof. UN special envoy for Syria Staffan de Mistura said: “we have not yet any official or reliable confirmation” of who carried out the chemical attack. An unpredictable President launching airstrikes, with neither evidence nor basic democratic oversight, was no issue for our Prime Minister. May’s government backed the US President all the way. On the other hand, Corbyn called for an independent investigation before missiles were launched.

The ‘Trump did it, so we support it’ Conservative line becomes more apparent the closer you look. Demonstrably, the Conservative government’s overall position on Syria changes according to what Trump happens to think on any given day. Foreign Secretary Boris Johnson has U-turned four times in less than a year on whether the government supports regime change in the region. Johnson’s stance flip-flops according to Trump’s policy.

Our Question Time audience member nailed it. The Conservatives want to reduce the election to playground sloganeering in order to distract from their appalling record. But a little consideration shows even their own slogans don’t make sense. Trump ignored basic constitutional democracy and bombed a sovereign nation like a military dictator. The Conservatives’ support for him was as mindless as their catchphrases. The real coalition of chaos is the Muslim-scapegoating, nuke-wielding, climate change-denying double act of Theresa May and Donald Trump.