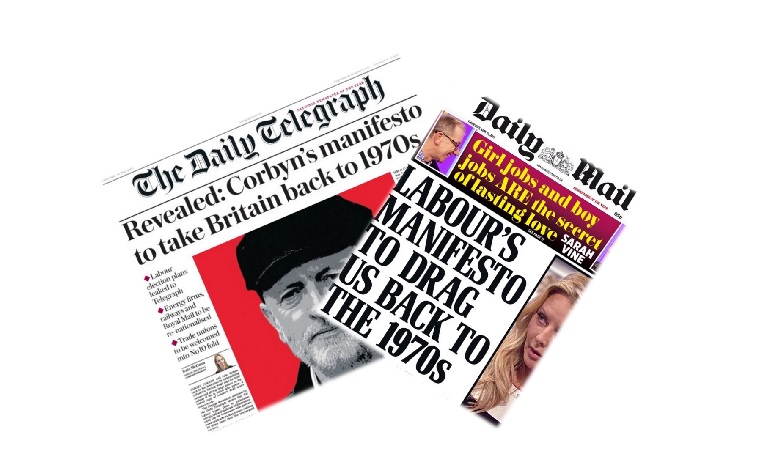 On 10 May, a draft of the Labour Party’s new manifesto was leaked to the press. While there were apparently few surprises in the document, the pro-Tory media completely lost the plot. And none quite so much as The Daily Telegraph.

We don’t comment on leaks. Our policies will be laid out when we launch our manifesto which is a plan to transform Britain for the many, not the few.

While many people praised the policies, criticised the leakers, and insisted that the manifesto was “exactly what you would expect to find in a fair and decent country”, The Telegraph‘s response was a bit different:

As was The Daily Mail‘s:

Both pro-Tory papers were quick to put their very similar spin on the draft manifesto. And The Telegraph in particular listed a number of what it apparently considered to be some of the most damning parts of the document. These included:

Essentially, then, The Telegraph was taking aim at immigrants, Gypsies, trade unions, corporate taxation, and those opposed to weapons of mass destruction.

The Telegraph is owned by billionaires (who the BBC once called “the tax haven twins”). Former chief political commentator Peter Oborne, meanwhile, has accused it of “placing what it perceives to be the interests of a major international bank above its duty to bring the news to [its] readers”. And it has consistently apologised for repressive dictators and human rights abusers. So it’s no surprise that the paper would react as it did to the leaked Labour manifesto. But perhaps the most hysterical part of its response was where it seemingly sought to paint the Labour leadership as a bunch of communists, saying:

Critics will also cite it as evidence that Labour plans to “soak the rich” with a huge tax raid on high earners and businesses, in a week when both Mr Corbyn and the shadow chancellor John McDonnell praised the works of Karl Marx.

This was in reference to Corbyn having said recently: “Yes, I have read some of Adam Smith, I have read some of Karl Marx.” (Note here that The Telegraph didn’t mention in the quote above that Corbyn had also read Adam Smith – the man considered to be “Capitalism’s Founding Father”. Probably because that would have weakened its argument.) McDonnell, meanwhile, had said: “I believe there’s a lot to learn from reading Kapital… and that’s been recommended not just by me but… mainstream economists as well.”

In other words, neither Corbyn nor McDonnell were singing the praises of communism. They were simply admitting to having read Karl Marx – a man who even right-wing sources recognise as one of history’s greatest economists.

‘A fairer, more democratic country? Not on our watch’

But then, The Telegraph has long shown itself to support elitist politics. So it’s no surprise that it would try to portray Labour’s moderately left-wing manifesto as some sort of insane Stalinist nightmare.

In reality, though, Labour’s plan for Britain looks set to be one of the fairest and most democratic in mainstream politics for a long time. And if it’s got establishment representatives like The Telegraph in an apparent state of panic, it must be doing something right.