Theresa May has smeared Nicola Sturgeon again, this time by literally making a story up [VIDEO] - Canary 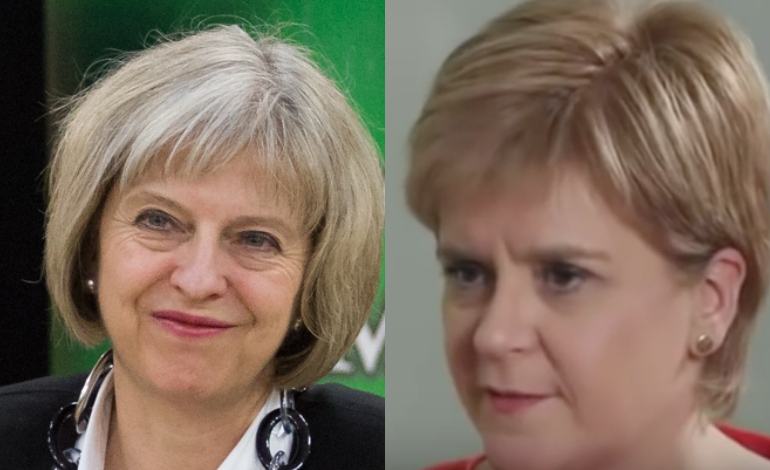 Theresa May caused a political storm on Wednesday 10 May, after she appeared to invent a story which smeared both the SNP and Nicola Sturgeon. But the PM’s claims did not stack up, as Sturgeon was quick to point out.

What’s May said about Sturgeon, now…?!?

May was in Nottingham on the general election campaign trail. Her visit came at the same time as the Crown Prosecution Service (CPS) said that no former Conservative MPs or party employees would be charged over the so-called ‘Tory election fraud’ scandal. When asked by journalists about the matter, May claimed that the “Scottish Nationalists” had also been fined (presumably by the Electoral Commission) over its expenses:

Nothing to see, here

But journalists were quick to point out that the Electoral Commission (EC) had never fined the SNP:

Indeed, a search of the EC website shows that it has never fined the SNP. But in 2015, it was carrying out an investigation into claims that the SNP and Business for Scotland (BFS) were:

And the EC concluded that there was:

no evidence during its assessment that the SNP and BFS worked together in a way that broke the law. There is therefore no need to open a full investigation.

Unlike the Conservative Party, which the EC fined £70,000 for:

significant failures… to report accurately on how much it spent on campaigning at three by-elections in 2014 and at the 2015 UK Parliamentary general election. The Conservative Party’s 2015 UK Parliamentary general election spending return was missing payments worth at least £104,765. Separately, payments worth up to £118,124 were either not reported to the Commission or were incorrectly reported by the party.

This isn’t the first time the PM has been involved in a smear campaign against the SNP. Previously, though, Sturgeon attempted to hit back via a BBC interview. But the broadcaster edited her rebuttal out. So this time, she hit back at May’s claims on Twitter:

PM should apologise for this attempt to smear @theSNP – unlike Tories, we abide by rules and have never been fined by Electoral Commission https://t.co/8wX9HCfMjK

Just break up. And be done with it.

The Canary asked the Conservative Party for comment, but none was received at the time of publishing.

May and Sturgeon already have a tempestuous relationship at best. Kind of like a married couple going through a messy divorce; with Scottish independence being the out-of-court settlement. So it’s no surprise that there’s a war of words between them. But with May’s latest cack-handed gaffe, the break-up in the marriage of the United Kingdom was just given another push towards the edge.