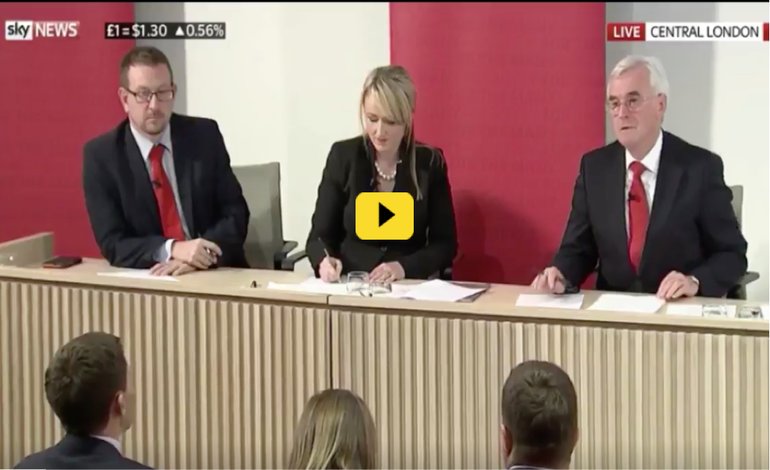 John McDonnell took the opportunity to call out media bias at a live press conference filmed by Sky News. And his pinpoint attack left reporters in the room speechless.

During the press conference, a journalist asked about the different media approaches towards Labour and Conservative economic policy. In particular, he asked why it was that, while Labour is expected to cost every item to the penny, Conservatives are often given a free ride. And McDonnell didn’t miss the opportunity to reinforce the point with other reporters in the room who are guilty of applying different levels of scrutiny to the two main parties.

I think it’s outrageous. Here we have the Labour Party coming forward with a costed programme, in detail. Some people might disagree in the way in which we’re trying to raise the funds, but at least they know what our choices are.

What we’ll try and do is measure productivity on how many of those questions you actually ask. Because I think it’s important we pin them down on this… How are they getting away with it? Well, I don’t think they are anymore. I think you’ve got a job that you can help the general public. As part of this election. Part of the democratic debate. Ask them point by point what the costings are. Because some of these questions are serious.

Truth bomb: @johnmcdonnellMP angrily challenges the media to hold the Tories to account on their completely uncosted, #ManifestoOfMisery pic.twitter.com/HClWZTvyew

The evidence suggests McDonnell is right on both counts.

On conservative bias in the mainstream media, multiple studies have established this as a matter of fact.

A 2013 content analysis of the BBC by Cardiff University found that:

Meanwhile, studies by the London School of Economics and the Media Reform Coalition have since found serious imbalance in reporting of Labour leader Jeremy Corbyn.

On the absence of costing and failure to challenge the Conservatives’ economic record, the evidence also supports McDonnell.

Since 2010, the Conservatives have claimed that austerity measures were aimed at ending the budget deficit. This was a central campaign promise at the 2010 and 2015 general elections. But they failed both times. Now, Theresa May is making the same promise again.

The real impact of Conservative economic policies is clear and incontestable. First, it created the slowest economic recovery in recorded history. Second, it made that recovery entirely unequal. In fact, only two regions of the UK are currently as well off, or better off, than they were before the financial crisis. Unsurprisingly, they are London and the south-east. Every other region of the UK is poorer than it was in 2007, and some are in outright depression:

Yet much of the media has so far portrayed Theresa May and her party as the safest pair of hands on the economy.