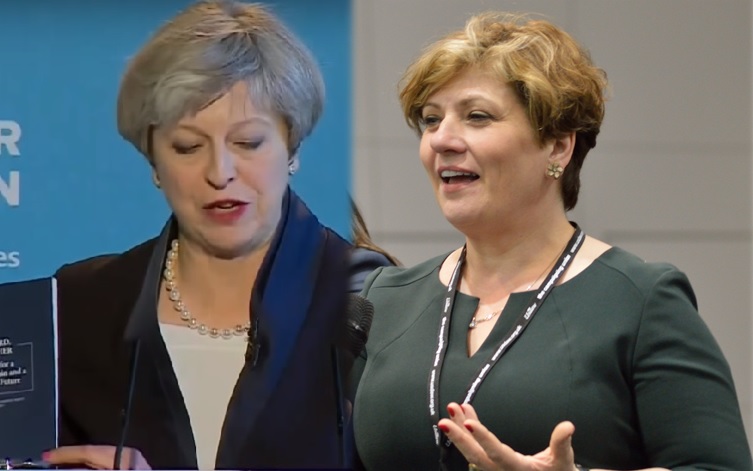 Labour’s Shadow Foreign Secretary Emily Thornberry spotted something very telling in the Conservative Party’s manifesto. And it says everything about the kind of ‘Global Britain’ Theresa May wants us to become.

Just the two of us…

In their manifesto [pdf], the Tories promise to “develop alliances and co-operate more with old friends and new partners”. They also add rather ominously:

We shall expand our reach around the world.

But Emily Thornberry managed to pinpoint just how vague their foreign policy appears to be, and what that says about their priorities:

The only country mentioned by name in 'Global Britain' section of the #Torymanifesto is the United States. That tells you everything.

For many, that will conjure up the following image:

Indeed, the Tories mention no countries in particular in their vision of a ‘Global Britain’. Apart from the US, of course:

We will build upon our existing special relationship with the United States, and forge new economic and security partnerships…

The party has already shown consistency in backing whatever Trump thinks on any given day. And the above statement is good reason to suspect that would continue under the Tories.

Labour’s international focus, on the other hand, is a lot broader and more specific. It highlights a number of foreign policy priorities in its manifesto, and insists [pdf, p117]:

Since the Second World War, Britain’s most important diplomatic relationship has been with the US. But that special relationship is based on shared values. When the current Trump administration chooses to ignore them, whether by discriminating on the basis of religion or breaking its climate change commitments, we will not be afraid to disagree.

The Conservatives really go overboard in their manifesto with the word “strong”, which appears on average around once a page. And in particular, they promise to deliver “strong defence” by creating “a new national infrastructure police force”, to continue Britain’s “world-leading counter-terrorism strategy”, and to “sustain our fine armed forces”.

But can we trust those promises given their record in power? Labour thinks not. Its manifesto points out, for example, that:

Under the Tories, there have even been reports of police officers having to use food banks. Hence why Labour has promises to “recruit 10,000 more police officers to work on community beats”.

At the same time, current counter-terror policies like Prevent have come under significant criticism. And that’s why Labour promises to:

review the Prevent programme with a view to assessing both its effectiveness and its potential to alienate minority communities. In doing so, we will address the government’s failure to take any effective new measures against a growing problem of extreme or violent radicalisation.

We have a duty to properly reward and remunerate our Armed Forces. Under the Conservatives, our Armed Forces have been hit by rent rises, pay restraint, and changes to tax and benefits, putting real pressure on service personnel and their families… Conservative spending cuts have put Britain’s security at risk, shrinking the army to its smallest size since the Napoleonic wars. The scrapping of Nimrod, HMS Ark Royal and the Harrier jump-jets have weakened our defences and cost British taxpayers millions… We will ensure that our armed forces are properly equipped and resourced… We will ensure they get the pay and living conditions that their service merits.

The Tories also insist they’ll “continue to give strong support to an international order in which rules govern state conduct”. They conveniently fail to mention, however, that the UN has released three reports in the space of a year criticising Tory policies for “grave” and “systematic” violations of disabled people’s human rights.

The Conservatives have also shown they’re committed to standing alongside the US if Trump unilaterally decides to go to war. This not only demonstrates their disregard for international law, but also highlights once again that they’re happy to ignore the lessons of the past (such as the invasion of Iraq).

Labour, on the other hand, is now led by a man who consistently got past foreign policy calls right. And instead of forging a new war coalition with the US, his party has pledged to “put conflict resolution and human rights at the heart of foreign policy, commit to working through the UN, [and] end support for unilateral aggressive wars of intervention”. It has also promised to “review all training and equipment contracts with repressive regimes, to ensure that Britain never colludes in the mistreatment of civilians”. In short, while Theresa May is apparently happy to put business before human rights – courting anti-democratic leaders from Turkey to Saudi Arabia –  Labour says it will put human rights and international law first.

Tories? Strong? Not so much.

In short, Theresa May’s vision for a ‘Global Britain’ is weak. There are promises to defend Britain, but Tory cuts while in power suggest they can’t be believed. There are promises to respect international norms, but the Tories still refuse to stand up against the human rights abuses of Britain’s allies. And the party may talk about expanding out into the world, but for now it seems to only have eyes for Trump’s America.

That’s not a strong, global vision. It’s just a recipe for more conflict and more destruction.

Britain deserves better. And so does the world.

– The Tories are the real danger to Britain and the world. To stop them, register to vote in the 8 June general election.