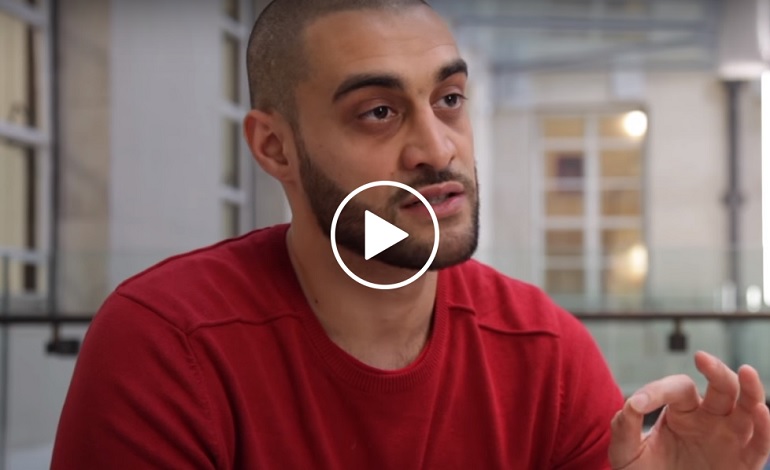 Conscious rapper Lowkey had already voiced his support for the #RizeUpUK campaign for voter registration. But now, he has joined the ranks of numerous other UK musicians in giving his full backing to Labour leader Jeremy Corbyn. And his argument is both simple and powerful.

Lowkey has long been an outspoken opponent of imperialism and a supporter of the world’s most vulnerable people. But with the 2017 general election approaching, he’s now turned his focus onto domestic issues. And in particular, onto the Conservative government and the opposition it faces from Jeremy Corbyn’s Labour Party.

In an interview with Double Down News, he says:

Speaking about the relationship between politicians and citizens who have been marginalised and disenchanted for many years, he insists:

A clear exception to the rule…

Lowkey then stresses how ordinary working people managed to achieve things like the eight-hour day by fighting hard and by uniting with people in the political class who were “receptive to these ideas”. And he says:

Now, Jeremy Corbyn not only is receptive to these ideas. He has been on the front line of these struggles…

Getting over the destructive legacy of privatisation under Margaret Thatcher, he insists, has been tough because both political and media elites have turned away from the idea of democratic public ownership. But as he argues:

Jeremy Corbyn is a glitch within that matrix. Because he does not perceive public services the same way that the rest of the political class do.

And that’s why corporate media outlets:

have spent decades invisiblising the dissent that Jeremy Corbyn represents.

It’s also why they’ll apparently “stop at absolutely nothing to ultimately discredit him”.

Foreign policy is clearly an issue close to Lowkey’s heart. And he pinpoints this as a key area where Corbyn’s opponents have sought to attack him as “weak”. Regarding how these people use preparedness to start wars or launch nuclear weapons as “somehow the measurement of ability to govern a society”, he says:

And with Corbyn, he insists:

You have a political candidate who is not allowing his foreign policy to be dictated by military industrial complexes… He is not willing to perceive the United States as some type of sacrosanct guide in terms of foreign policy. I personally view that as strong defence.

Lowkey makes it clear that he “wholeheartedly” supports Corbyn because he has “wide open ears to those struggling on the front lines of the protests for social justice”. And he concludes:

It’s a simple and powerful argument. And one that might just be able to convince marginalised and disenchanted citizens to go out and vote on 8 June.