You're not imagining it. The Tories' manifesto proves they really have turned into UKIP - Canary 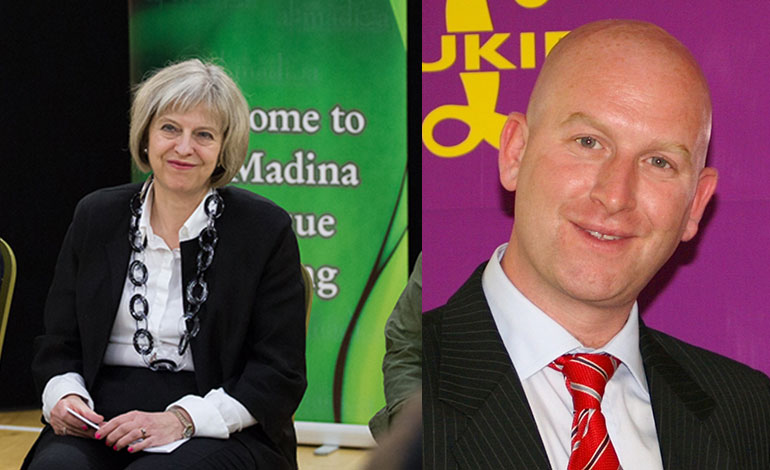 The Conservative Party manifesto has been released. Among some already broken promises and a whole host of pledges to deliver something ‘strong and stable’, one thing is very clear: if Theresa May is elected on 8 June, her government will attack and segregate migrant workers.

Skilled immigration should not be a way for government or business to avoid their obligations to improve the skills of the British workforce. So we will double the Immigration Skills Charge levied on companies employing migrant workers, to £2,000 a year by the end of the parliament, using the revenue generated to invest in higher level skills training for workers in the UK.

This doubled ‘skills charge’ will go towards training British workers, but will only apply to businesses who hire workers from outside of Europe. While training more people in the UK is positive news, this pledge delivers an either/or proposition – pitching the British worker against the migrant. It appears a cynical attempt to attract UKIP voters in the upcoming election and comes as part of May’s plan to drive a hard ‘bargain’ in Brussels. Along with her promise to reduce net immigration to the tens of thousands [pdf p48].

Britain is an open economy and a welcoming society and we will always ensure that our British businesses can recruit the brightest and best from around the world and Britain’s world-class universities can attract international students.

While the Tories may be open and welcoming to the elite, the same certainly can’t be said for non-EU workers. But the majority of non-EU nationals who come to the UK are actually here to study (41%). And they bring a huge skills resource and a boost to the economy: £25.8 billion, according to Universities UK’s new report. Likewise, 23% coming from beyond the EU have already secured a definite job, while only 9% are looking for a job.

This compares to EU nationals, where 45% have secured a definite job, 27% are still looking for work, and only 13% come to study.

And that’s not all. The Conservatives will also hammer migrant workers by charging them more to use the NHS. They plan to increase the Immigration Health Surcharge [pdf p67] to £600 for migrant workers and £450 for international students.

But the Tories’ logic is twisted. They want to encourage non-EU migrants to study here and benefit our economy. But then victimise them as soon as they’ve finished. This was exactly the same logic which got May into trouble when she tried to introduce the £35,000 earnings threshold for non-EU migrants in 2016. A law which could have starved Britain of vital talent in the teaching, charity, and entrepreneur sectors.

While many may argue that immigration needs to be controlled, the Conservatives’ manifesto currently doesn’t have the answer. Instead, they continue to victimise ‘the other’ in the hope it’ll somehow work out.