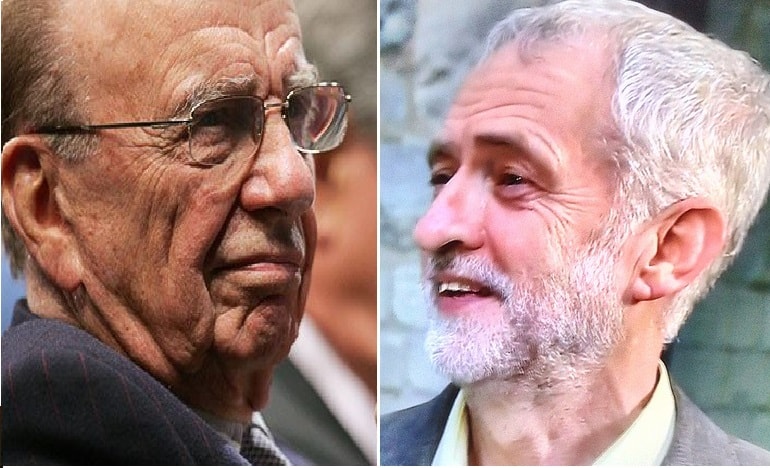 Rupert Murdoch has been caught absolutely bricking it over Jeremy Corbyn. An investigation into the media’s election coverage lays bare how desperate Murdoch and other newspaper barons are to destroy the movement spearheaded by Corbyn.

Part two of Loughborough University’s audit shows hostility towards Labour is through the roof across eight out of ten national newspapers. Seven of those newspapers are owned by billionaire press barons with an active self-interest in maintaining the status-quo.

The following graph, looking at data from last week, shows the extent of negative coverage these billionaires bring to Labour: 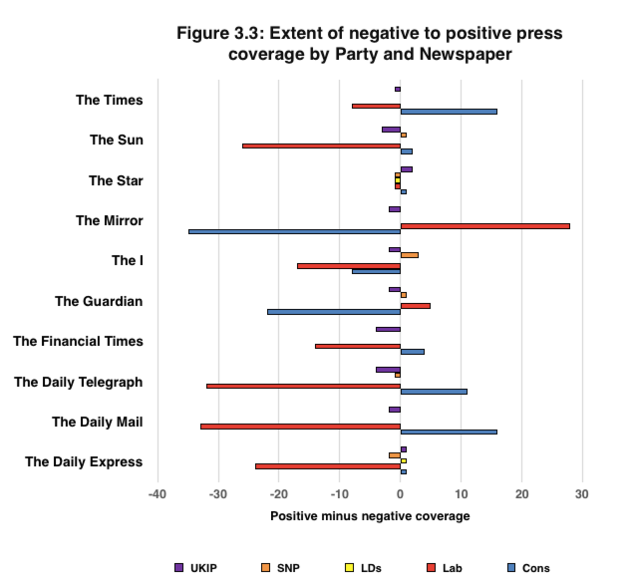 Last week, only The Guardian and The Mirror’s reporting on Labour was more positive than negative. Newspaper hostility has intensified towards Labour under Corbyn’s new direction. In other words, the findings mark a huge change from reporting on New Labour. The billionaire press is now incredibly anti-Labour, while The Telegraph, The Mail and The Times are also reporting very positively about the Conservatives. By contrast, The Sun actually backed Tony Blair in the 1997 general election, for example.

As the data confirms, that’s all changed:

And here’s The Daily Mail on full blown pro-Tory form, on the 19 May:

DAILY MAIL: At last, a PM not afraid to be honest with you #tomorrowspaperstoday pic.twitter.com/MUjpjNWHPk

The investigation also offers an insight into the opinion polls. The data shows that the newspapers with the most circulation are the most negative about the Labour leader. This could explain the Conservatives’ lead, given they offer policies that would damage the security of ordinary Britons. Although, support for Labour has recently surged to 34% following the launch of its manifesto, according to a new poll by IPSOS Mori.

Under May’s watch, these newspaper barons are maintaining and increasing their wealth, according to the Sunday Times rich list [paywall].

Express owner Desmond, for example, is a “serious player” [paywall] in the London property market. He’s currently engaged in a £1bn [paywall] property development scheme, including 722 homes. In other words, Desmond is making huge profits from skyrocketing house prices facilitated by the Conservative government. So it’s no surprise billionaires like Desmond are so hostile to the social housing policies of 2017 Labour.

As The Canary previously reported, Loughborough University also released a report on election coverage for the week before. The Conservatives are the “most frequently reported” and “most extensively quoted” party, while issues pushed by Labour are “marginalised”, according to part one. In newspapers, for example, the Conservatives received by far the most direct quotation, exceeding Labour by 45%.

The extent to which personalities rather than policies dominate news was also encapsulated. May’s husband, Philip, was the fifth most covered ‘political figure’ during the first week of both newspaper and TV election news. All because of the sheer weight of reporting on a sanitised family appearance on the One Show.

Sidelining policy debate is important for the elite media, because the public overwhelmingly supports Labour’s policies. But the fresh hostility displayed by Murdoch and the newspaper barons betrays a compelling truth. They are absolutely bricking it over a Corbyn victory.