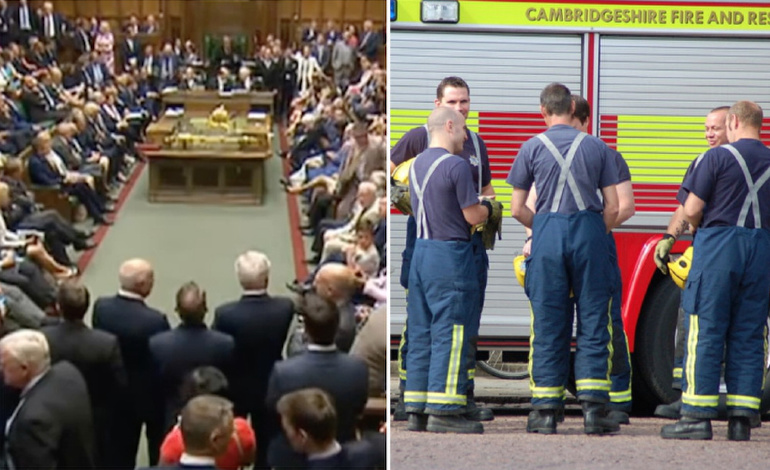 Conservative MPs are showing their true colours following the defeat of Labour’s amendment to the Queen’s speech, which would have removed the pay cap on public sector workers. They are coming up with excuses for not supporting the motion, and those excuses have become increasingly desperate.

Following the £1.5bn deal between the Tories and the DUP, including £1bn of new money, Conservative MP Heidi Allen tweeted:

But Allen couldn’t bring herself to match this tweet with positive action. Instead, she attacked the amendment:

The text of the amendment read:

[MPs] respectfully regret that the Gracious Speech fails to end cuts to the police and the fire service; commend the response of the emergency services to the recent terrorist attacks and to the Grenfell Tower fire; call on the Government to recruit more police officers and fire-fighters; and further call on the Government to end the public sector pay cap and give the emergency and public services a fair pay rise.

Make your mind up!

But maybe Allen realised this was a poor excuse. Because she came up with another one. Although this one wasn’t much better. She claimed that:

Public services includes the very highest paid chief executives, managers, Whitehall chiefs too. I cannot support a blanket pay rise to all of those. We need to focus on those public sector workers such as nurses, healthcare assistants and all those on the front line.

Given that the spirit of the amendment was very much about giving emergency workers, nurses, firefighters and teachers a pay rise, her statement seems a little disingenuous to say the least. And it’s not as though any finer details to the amendment couldn’t have been ironed out afterwards.

But other Conservative MPs weren’t much better. For example, Johnny Mercer claimed that:

I will persistently be a loud voice to remove public sector pay cap for frontline workers. But will not vote with this political game today. https://t.co/baW69KHZoo

Judge me if public sector pay cap is not lifted. Results for hard-working people, not vanity votes for attention. https://t.co/vaBWSNmi23

It looks like it will be very easy to judge Mercer on his record. In the space of just hours, the government performed a series of U-turns on the public sector pay cap, eventually settling on the fact it would be business as usual for screwing over our emergency services.

Meanwhile, Allen is back in the Commons, calling for an inquiry into food banks. But an inquiry isn’t needed. What is needed is to get rid of the Conservative austerity measures that mean public sector workers are facing a real-terms pay cut; and measures that have targeted the most vulnerable people in society.

Nurses and police officers using food banks are not going to be grateful to Allen’s calls for an inquiry. They will be angry. Because she and her fellow MPs had a real chance to do something about their situation. And they failed.

With the Conservatives ruling in a minority government, there will be plenty of time for Allen, Mercer and their ilk to put their votes where their mouths are. Let’s just hope they grow a backbone. Because millions of people are depending on it.

– Sign the petition to demand firefighters receive a pay rise.