'Fury' as Tories ditch northern rail promises. But Andy Burnham has a plan [VIDEO] - The Canary 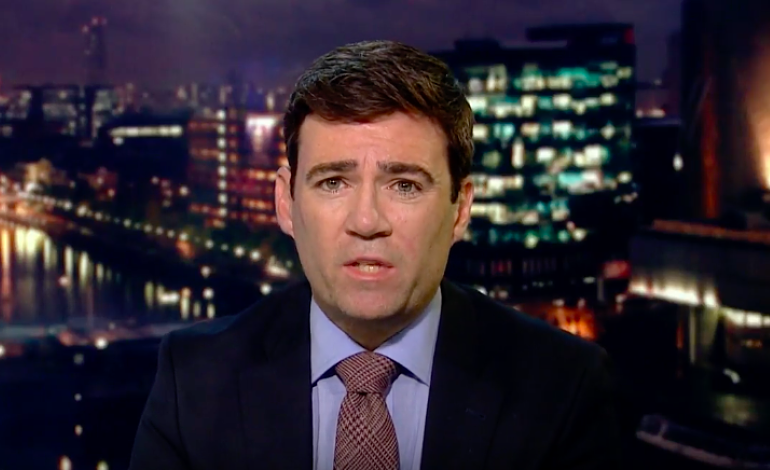 Andy Burnham says the government will face “fury” after Transport Secretary Chris Grayling announced support for a billion-pound London rail project while scrapping projects to improve rail infrastructure in the north. This move is seen as a sidelining of commitments to the north in favour of the south. And MPs could be fighting back.

Support for Crossrail 2, a new connection to improve transport between the north and south of London, came on Monday 24 July after Grayling met with London Mayor Sadiq Khan the week before.

But the uproar has arisen because, in the week before the announcement, Grayling had been quietly scrapping plans to invest in northern rail infrastructure projects, such as the electrification of several routes between:

The upgrade of platforms at Manchester Piccadilly, which are overloaded and cause delays, is also under review.

The government is denying any abandonment of the projects. Grayling said they’ll be electrifying certain parts of the track where they think it will make a difference. And they can use bi-mode trains instead of electric trains that can travel on both electrified and non-electrified parts of the track. But some have argued these are less efficient and more expensive.

A spokesperson for the Department for Transport (DfT) said:

We are investing around £40 billion in our network as part of the biggest rail modernisation programme for over a century to provide faster journeys and more comfortable trains.

This includes delivering improved journeys for passengers right across the North.

But this doesn’t seem to be convincing people. The rail projects were part of former Chancellor George Osborne’s vision of a ‘northern powerhouse’; one that would increase prosperity and investment in the north. And according [BBC iPlayer 16:30] to former Treasury minister Jim O’Neill, Theresa May’s former advisers Fiona Hill and Nick Timothy wanted to quash the vision out of spite towards Osborne. O’Neill said that, now the advisers have gone, May is likely to be more supportive of the northern powerhouse.

Later, Greater Manchester Mayor and former Labour MP Andy Burnham confirmed the term ‘northern powerhouse’ was seemingly being erased from communications in Westminster. But what worries him is that no one in government has fulfilled commitments to the north. He also said people would be furious at Grayling’s action.

the government will be making a major mistake if it underestimates the fury that people here feel when they see those announcements last week and then they hear today that billions more is about to be spent on London.

He also criticised [1:38] the announcements being made after the recess of parliament and urged a vote on the matter:

I would have loved to have seen Chris Grayling stand up in parliament and announce the scrapping of various electrification schemes alongside the green light for Crossrail 2. Because if he had’ve done that, I think there would have been uproar.

And where I will go now with this is contact Greater Manchester MPs, and indeed other MPs across the north, because while this may be the government’s view… I doubt it will be parliament’s view. And I think MPs need to seek a vote when the House returns to see whether or not MPs agree that this is the way to proceed with rail investment in our country.

The Crossrail 2 project could cost £28-32bn [paywall], twice as much as Crossrail 1 (an east to west link in London). Funding of the project remains a question. And half of the construction costs must be paid upfront. It is thought a third of the funding would come from business; a third from London; and a third from central government.

Examples of the costs the government will be saving from scrapped projects include around £500m for the Wales line.

But the consequences of further underinvestment and bad connectivity is even greater regional inequality. And rather than showing the Crossrail project in a positive light, it could arguably undermine public support.

It seems that the government was hoping the rail plans may go unnoticed. But instead, they’ve lit a fire under MPs in the north who could be planning to fight back.