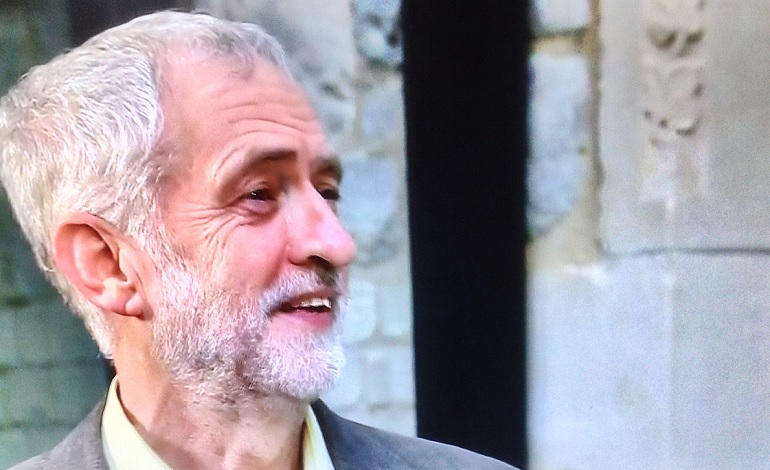 The Conservatives and swathes of the media have been pushing the story that Labour promised to wipe out all student debt. Labour, they say, has now U-turned on that pledge. But this ‘pledge’ wasn’t in the manifesto – a manifesto that was widely reported on at the time. Instead, claims of the alleged ‘promise’ come from a distortion of an NME interview with Jeremy Corbyn. And now, polling from YouGov shows just how spurious the establishment’s claims are.

YouGov took a statement from Corbyn’s interview with NME and posed the following question to adults in the UK:

How do you personally interpret the following statement? ‘I don’t see why those [students] that had the historical misfortune to be at university during the £9,000 period should be burdened excessively compared to those that went before or those that come after. I will deal with it.’

These were the results: 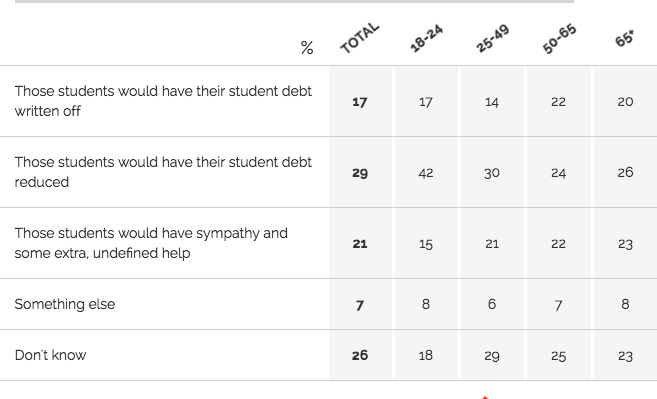 The idea being widely pushed in the media is that Labour purposefully misled “impressionable” young people. It’s worth pointing out that the strongest evidence for this – the NME interview – won’t have even been seen by most young people; and also, that anyone who did would have seen Corbyn’s more nuanced answer:

First of all, we want to get rid of student fees altogether. We’ll do it as soon as we get in, and we’ll then introduce legislation to ensure that any student going from the 2017-18 academic year will not pay fees. They will pay them, but we’ll rebate them when we’ve got the legislation through – that’s fundamentally the principle behind it.

Yes, there is a block of those that currently have a massive debt, and I’m looking at ways that we could reduce that, ameliorate that, lengthen the period of paying it off, or some other means of reducing that debt burden.

I don’t have the simple answer for it at this stage – I don’t think anybody would expect me to, because this election was called unexpectedly; we had two weeks to prepare all of this – but I’m very well aware of that problem. And I don’t see why those that had the historical misfortune to be at university during the £9,000 period should be burdened excessively compared to those that went before or those that come after. I will deal with it.

He said: ‘Just this morning Jeremy Corbyn has announced that the tuition fees will be abolished straight away from September if there’s a Labour government, and that we will bring back immediately EMA and also that every existing student will have all their debts wiped off.’

Hussain spoke of wiping debt for ‘existing students’. This was not part of the pledge; in actuality, Labour planned to rebate student fees starting from 2017-2018. Labour should investigate if Hussain was mistaken or he misspoke, and strive for better message discipline. But it’s important to point out that this still wasn’t a promise to wipe out debt for ex-students.

Hodgson, meanwhile, said “could write off”. This isn’t a firm pledge, but it’s still problematic. It’s not clever to be saying things like ‘we could do this’ before you know you can. Obviously, a failure to do so later would make you look duplicitous.

But the establishment is alleging that Labour misled young people on a national scale. Not that a couple of low-level ministers made claims or suggestions that were never broadly reported on in the first place.

To say this fabricated scandal is in tatters would imply it was solid to begin with. The scandal-pushers have crucially failed to produce evidence that a significant number of young people believed in this non-pledge. And the more that they push this nonsense, the worse they look to anyone with internet connectivity.

The 2017 election showed that young people by and large aren’t influenced by the Conservative Party and their friends in the corporate media. And the aftermath is showing that they still don’t get that.