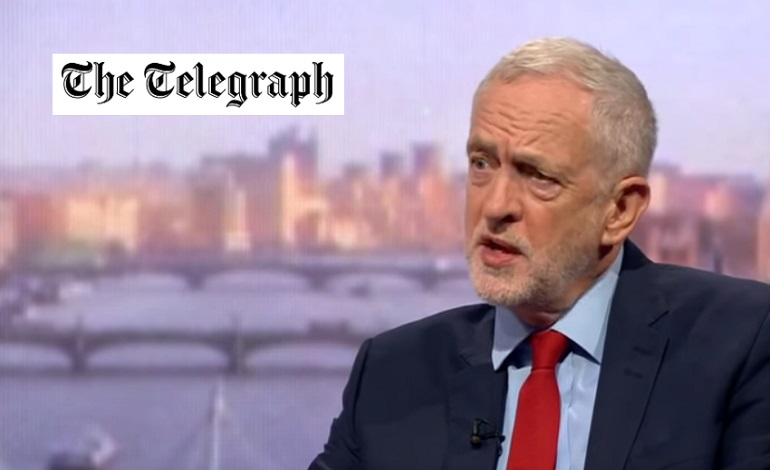 The Telegraph was forced to alter an article about Jeremy Corbyn after it emerged that part of it was completely inaccurate. But in a “profoundly dangerous” move, the press regulator has refused to act. Suggesting that the right-wing paper can seemingly lie about the Labour leader with impunity.

On 2 July, The Telegraph published an article detailing Labour Party Chair Ian Lavery’s comments about possible deselection for anti-Corbyn MPs. In it, The Telegraph said that:

Ian Lavery, who was in charge of Labour’s election campaign, hinted that MPs could be de-selected if they do not agree with Mr Corbyn’s plans as it emerged the move could accelerate plans for a new party.

The paper went on to say that “amid the chaos”, “senior” and “moderate” Labour MPs could be “working behind the scenes” to form a new, “centrist” version of the party; that is, anti-Corbyn MPs could break away and form a new party.

But there was a problem with The Telegraph’s article. As the original headline stated:

The Telegraph gave the impression that it was Corbyn-supporting MPs that were, as it said, “working behind the scenes” to form a new party. When in fact, the article went on to state that it was the “moderate” MPs doing this.

But in a move which Phillips told The Canary was “profoundly dangerous”, the IPSO told him The Telegraph has no case to answer.

In emails seen by The Canary, the IPSO said:

While we note that the original headline of the article stated that ‘left-wing MPs’ may form a new party, the first paragraph of the article made it clear that the party chairman had warned ‘moderate MPs could be purged’ and went on to detail the various allegations of discontent in the Labour Party. Where the article made clear exactly what section of Labour MPs the headline was referring to, and the headline has now been amended to make this clear, we did not find it to be inaccurate.

Press standards: “on the floor”

The Canary spoke to Phillips about his complaint. He said that The Telegraph’s original headline was “clearly a breach of the accuracy rules”. And he noted that “someone can publish a piece saying ‘IPSO robs trains’ as long as the article itself said ‘Ronnie Biggs robs trains'”:

No one is claiming the headline was accurate. And The Telegraph even changed it after it had been up for days. So why no ruling of inaccuracy by the IPSO? I’m worried that it sees its clients as the newspaper owners not the newspaper readers. And so it functions like one of those helplines for customers that doesn’t actually help.

Phillips went on to say that:

IPSO was supposed to raise standards after the hacking scandals. This ruling… barely gets standards off the floor. National newspapers have huge power. Readers have been assured that regulators hold them to account and make them publish corrections and apologies if they publish falsehoods. Most people would be disturbed to learn that for IPSO this doesn’t apply to headlines.

It is not our policy to debate or discuss rulings and decisions after the event. Mr Phillips has received our decision on this matter, which sets out the Complaints Committee’s reasoning, and we have nothing to add to that correspondence.

As Phillips told The Canary, “Some people might think ‘Oh well, I don’t like the Labour left so why does a false headline matter?’ But next time it could be you”. There is, though, also a deeper issue at play. The UK media has been repeatedly criticised by the likes of the UN and the EU over its poor conduct, especially in relation to disabled people, racism and xenophobia. Also, the British press is currently 40th in Reporters Without Borders freedom index.

So if papers like The Telegraph can just make up a headline to benefit its own agenda, and then just change it without recourse when it gets caught, it compounds the dire state of the UK media. And puts us on a dangerous course in our already floundering ‘democracy’.