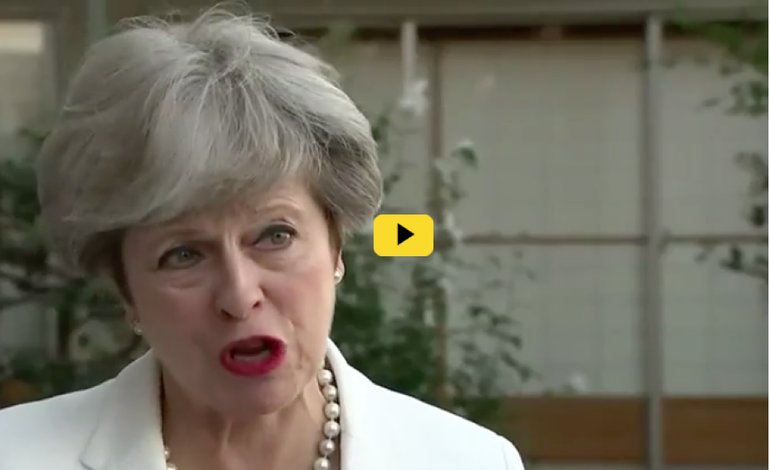 In spite of losing a double-digit lead (and her party’s majority) in the general election in June, Theresa May insists she is the person to lead Britain forward. In a stunning interview with the BBC, the Prime Minister has confirmed she intends to lead the Conservatives into the next general election.

Here for the long term

During a visit to Japan, a BBC reporter reminded the PM of the “rather bruising few months” that her botched election call ushered in. He asked May if, given this, she still planned to lead the party into the next election. May replied with a serving of word-soup worthy of Donald Trump, saying:

Yes, I’m here for the long term. And it’s crucial. What me and my government are about is not just delivering on Brexit. We are delivering a brighter future for the United Kingdom.

I’m here in Japan. And I will be talking about the long-term relationship between the UK and Japan. And it’s my intention not just to deliver a good Brexit deal for the UK, but also to ensure that Global Britain can take its place in the world, trading around the world, and that we deal with those injustices domestically that we need to do to ensure that stronger, more global, but also fairer Britain for the future.

"I'm here for the long term". @theresa_may says she'll still be prime minister at the next general election. pic.twitter.com/N5zxU7Ccuk

It is unclear which injustices May is referring to in her interview with the BBC. She might be referring to the £283m-worth of weapons her government recently sold to Saudi Arabia despite the abuses that the Saudi kingdom continues to commit in Yemen. It could be that just one organisation handed out 1.2 million three-day emergency food parcels in Britain during the last year, to people too poor to eat. And it could of course be her party’s ideological austerity programme, which the UN recently described as creating a “human catastrophe” in the UK. Unlikely.

After seven years of Conservative government, the UK is now the worst performing advanced economy in the world. And there is no evidence that the Prime Minister plans to steer a different course now.

It appears that voters are starting to feel like May’s death grip on Number 10 is the real injustice that Britain needs to deal with before it can become a fairer place. 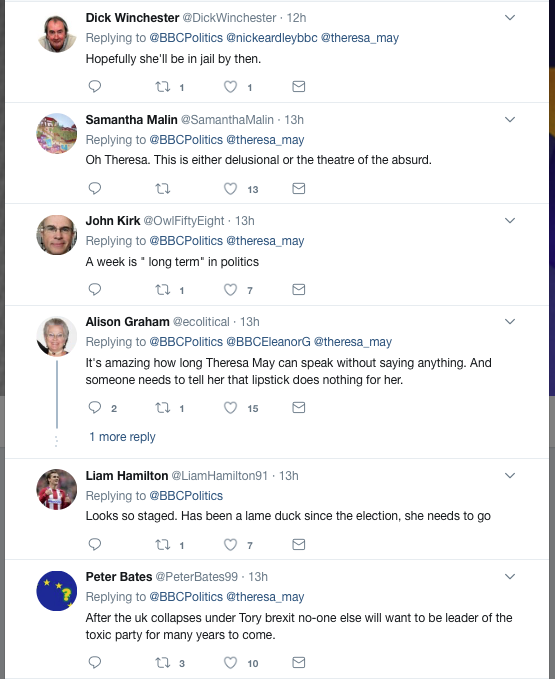 But like so many times before, May is making a promise she is unlikely to keep.

May is speaking just weeks after an election campaign in which she lost her party’s majority despite starting with a 20-point lead. The key reason for her loss was a manifesto of misery which offered no solutions to the problems of the day. But her personal performance in the campaign sealed the deal. And here again, we have empty promises delivered in muddled sentences.

In July 2017, Theresa May achieved the unique distinction of polling lower than any prime minister in UK history a month after the general election. With her satisfaction ratings plummeting, and her opponents on the rise, the Conservative Party has a whiff of decay about it. But without a single unifying candidate, and no one wanting their hands on the steering wheel as the Brexit juggernaut hits, May remains leader by default. There is no dream candidate, and if there were, they would not want the job now.

Meanwhile, a rejuvenated Labour Party is making advances in previously unthinkable constituencies across the country.

If May and her party learned anything from the 2017 general election, they’re doing their best not to show it.

– Support the Unseat Campaign which is targeting eight marginal seats where Conservative candidates are vulnerable in next election.

– Support the work of Momentum, a grassroots pro-Corbyn Labour campaign.