It was all over after Corbyn mentioned that scandal. Theresa May could only mumble incoherently. [VIDEO] - The Canary 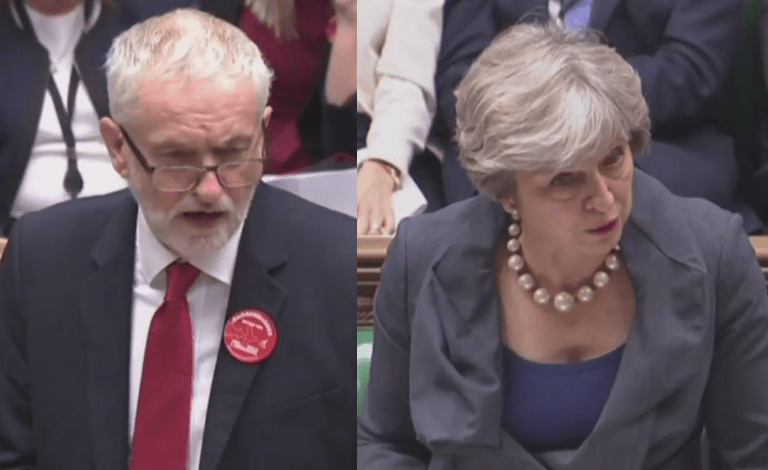 It was all over after Jeremy Corbyn mentioned that scandal. Theresa May could only mumble incoherently.

The Labour leader had been challenging May on her government’s flagship welfare ‘reform’ – Universal Credit, which actually represents a huge cut to some ordinary people’s support. Some families will lose thousands of pounds per year.

With that in mind, Corbyn drew attention to a scandal. On top of the cuts, the Conservatives are charging welfare recipients for needing advice. Corbyn said [12.45]:

Not only are people being driven into poverty, but absurdly… the universal credit helpline costs claimants 55 pence per minute for the privilege of trying to get someone to help them claim what they believe they’re entitled to. Will the Prime Minister today show some humanity, intervene and make at least the helpline free?

55p per minute means a 20-minute call to the helpline sets a claimant back £11. But May refused [13.19] to even acknowledge the cost of the helpline:

I’ve made very clear that we continue to look at how we’re… dealing with this and ensuring that we get this system out in a way that is actually working for people and the performance is increasing… and it is working, because more people are getting into work on Universal Credit than are, were on Jobseeker’s Allowance.

On social media, people were appalled:

55p a minute helplines are a scandal for benefit claimant. May should just agree with Corbyn and axe the charge. She didn’t #PMQs

Corbyn hammering May on Universal Credit. It's indefensible and incredibly cruel. Corbyn passionate on poverty and May floundering #PMQs

Tory MPs get all the help they need

By contrast, May seems eager to help Conservative MPs who lost their seats in the general election. At a meeting with the 1922 committee of Tory backbenchers in June, the Prime Minister promised to give financial support to Conservative candidates out of a job.

One MP leaving the meeting said:

She was very concerned about people who have lost their seats. The party is going to help them, some of them are in dire financial situations. She did say sorry, several times. She apologised for colleagues losing their seats, for making the call about the early election

While saying sorry “several times” to her MPs, May won’t even acknowledge the stinging costs of the Universal Credit helpline. With such a messed-up set of priorities, it’s no wonder the Conservative Party resembles a sinking ship.

-Find a local team with the People’s Assembly Against Austerity.