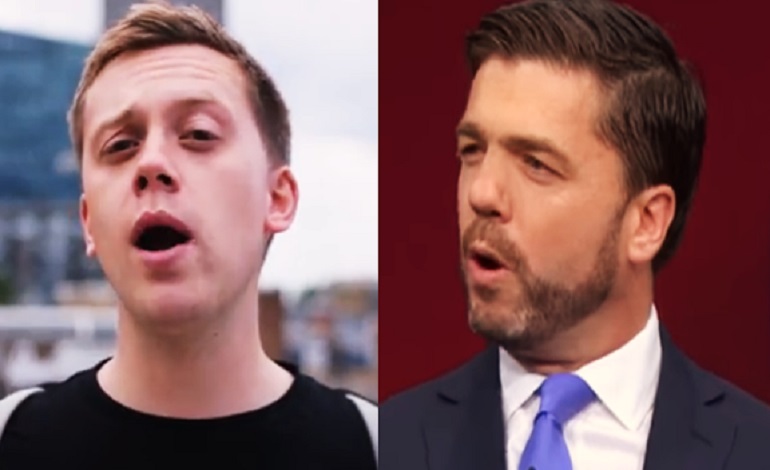 A notorious Conservative MP is going to get a rather “rude awakening” on Saturday 14 October as the stage is set for what some hope will be the “largest political rally” to hit the Welsh town of Haverfordwest in more than a century. And Owen Jones is heading up the event.

The pro-Corbyn campaign group Momentum and the People’s Assembly are taking their unique #unseat campaign right to the heart of Tory MP for Preseli Pembrokeshire Stephen Crabb’s constituency. As Momentum says about its campaign:

If we only campaign during election time, we end up taking voters for granted. We have to get out and canvass now. We’ve got to be embedded in our communities. We’ve got to be that living, breathing movement that is present in people’s everyday lives.

As The Canary previously reported, the #unseat campaign is targeting:

And Crabb’s constituency is another perfect target for Labour. It’s ranked number 11 on the party’s target seats list for the next general election, with Crabb only having a majority of 314. And it could, potentially, be an easy win for Labour, as it increased its vote share by 14.5% on 8 June, hoovering up UKIP and independent votes.

Crabb on the run

So, Momentum and the People’s Assembly have joined forces with Unison, Stop the War Coalition, the WASPI campaign and others to hold a rally on Castle Square in Haverfordwest. The organisers told The Canary it will hopefully be “the largest political rally held on Castle Square since the suffragettes visited in 1911”. And they believe it could be a “rude awakening” for Crabb.

Headlining the event, as he has done with most of the #unseat campaigns, is Guardian columnist Jones. Other expected speakers include Stop the War Coalition co-Founder Chris Nineham; Wales Green Party Leader Grenville Ham; Karen Passmore from Disabled People Against Cuts (DPAC); Sue Pasternak of WASPI; local anti-bedroom tax and social justice campaigner Paul Rutherford and others.

A Momentum statement seen by The Canary says:

It is easy to see why constituents have such a strong feeling that Crabb, like many Tory MPs, should go. He voted to take away £1,500 a year from disabled people while remaining a Mencap patron and playing an active role in pushing through the Bedroom Tax against the opposition of the House of Lords by acting as a ‘teller’ (vote counter) for the Tories…

And Momentum also points out that Crabb was notoriously “the most short-lived Welfare Secretary since 1945”; only lasting in the job four months from March-July 2016. Since leaving the Tory front bench, he warned Theresa May that ‘Brexiteers’ also faced a “rude awakening” if they thought immigration would be cut after the UK left the EU. But, he has otherwise largely been silent.

Jim Scott from the local People’s Assembly in Pembrokeshire told The Canary:

We have been working towards this moment here in Pembrokeshire for many years; it is fantastic that it is all finally coming together… Crabb is now universally disliked across the political spectrum: a ‘disability patron’ that votes for cuts to disabled people’s support at every opportunity he gets, Crabb’s hypocrisy clearly knows no bounds. His time is up, his party’s austerity polices now discredited; their leader, May, is a national laughing stock.

So, the event starts at 11am at Pembrokeshire college with training workshops. Then the rally begins at 3pm on Castle Square. Concluding the day is a ‘Stand up to Austerity’ comedy and variety evening, featuring Jones, Mark McGowan (the Artist Taxi Driver) and others.

But what’s interesting about this particular #unseat target is that Labour, the Greens, Plaid Cymru and the Lib Dems have, according to Momentum, agreed to cooperate in campaigning against Crabb. And while this kind of cross-party operation may not work on a national level, it is telling of the feeling of discontent with this Tory MP in a rural Welsh constituency.

This article was updated at 11pm on 11 October to reflect that the rally begins at 3pm on Castle Square, not Pembrokeshire College as previously stated.

– Find out more about the event, and book tickets for the variety evening.