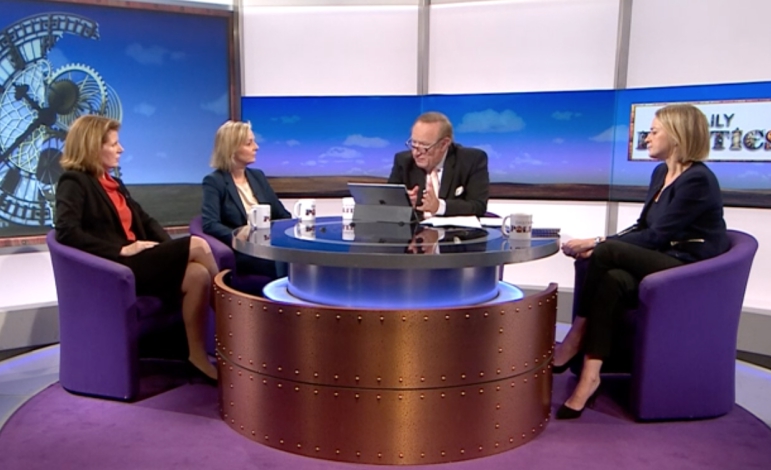 Chief Secretary to the Treasury Elizabeth Truss made an excruciating attempt to defend the government’s 55p a minute helpline for Universal Credit claimants. But not only was she unable to defend the policy, her answer also showed how out of touch she is with the cuts her own government has made.

Truss was appearing on the BBC’s Daily Politics Show. Host Andrew Neil quizzed her on why the government thought it was justifiable to charge people 55p a minute to call the helpline. But she was unable to answer. Instead she came up with a new solution:

People report regularly to the Jobcentre, that’s where they can get the help… I would encourage people to visit the Jobcentre, go in and get the advice.

But these are people who’ve got kids to look after, they can’t afford… nannies… Phoning maybe the only way.

And as Neil pointed out, landlines are cheaper but:

Many people now don’t have landlines because… if you’re counting the pennies, you save on the rental from a landline… And you’re charging them 55 pence a minute! Why are you doing it?

Truss didn’t have an answer:

We’re moving to new model of the way we support people… it’s much more about helping people get into work.

Neil tried yet again to get an answer to the question:

Why are you charging them 55 pence a minute to call up and try and get the Universal Credits payments fixed?

You do sometimes wonder if the government knows what it’s doing?

But there is one small problem with Truss’ solution. Her government closed 15 Jobcentres in August and September. And it is planning on closing 87 further centres. This is the equivalent to 1 in ten Jobcentres closing.

The government claims that the closures will save more than £140m over the next ten years. And one of the reasons cited for justifying the closure is Universal Credit. Because 99% of applications for the benefit are made online. But it’s hardly surprising Truss isn’t aware of the impact the closures could have. In February, the Department for Work and Pensions (DWP) admitted that it hadn’t assessed the impact that shutting the centres could cause.

Not the only problem

But a lack of Jobcentres is not the only problem with Truss’ proposal. Universal Credit is, for example, replacing Employment and Support Allowance. This is the benefit paid to people who are too sick and/or disabled to work. For many in this group, getting to the Jobcentre could be extremely difficult.

And then there’s the fact that Universal Credit is also replacing Working Tax Credit. This means that people who are in work and potentially working full time on a low wage will need to claim. It is unclear how these people would even be able to find the time to visit the Jobcentre.

Finally, it is clear that Truss has never had to visit a Jobcentre out of need and has no idea how they work. Decisions are not made in Jobcentres but by decision-makers in central offices. Some Jobcentres do have phones where people can call the DWP for free. But there are reports of the phones being taken away.

Meanwhile Jobcentres work on targets, with advisers rewarded if claimants are sanctioned. One email leaked in 2015 claimed that advisers were supposed to:

In other words, these are not circumstances that suggest they are institutions that exist to help people in need sort out the money that they are entitled to.

Hopelessly out of touch

Truss’s car-crash interview showed how hopelessly out of touch she is with what her government is doing. She was not able to justify charging the poorest people in society 55p a minute to sort out their claims. And she was not able to offer any kind of meaningful solution.

And Neil pretty much summed it up. You do really have to wonder if the government has any idea of what it’s doing.

– Support the People’s Assembly Against Austerity