'Desperate' Royal Mail has just got a court to block strike action. And the union isn't happy. [VIDEO] - Canary 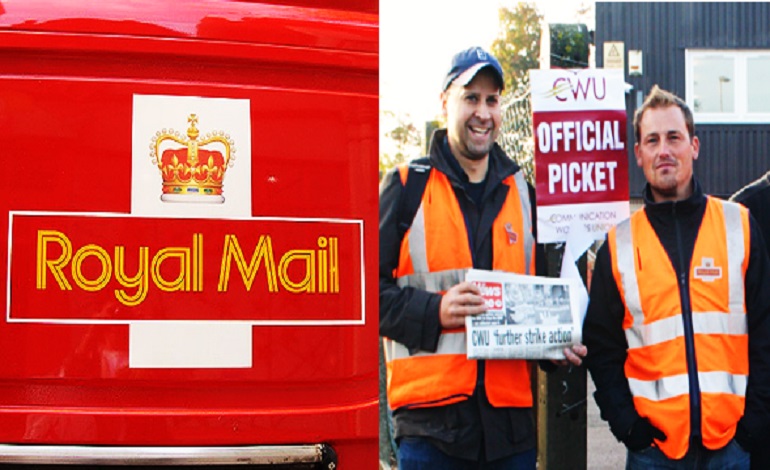 Royal Mail Group (RMG) has forced the Communication Workers Union (CWU) into court, over planned strike action by the trade union. Workers voted to strike over pensions, jobs and wages. But in a move described as “desperate” by CWU chiefs, RMG tried to block the union from taking industrial action, arguing the Trade Union Act doesn’t apply. And the court agreed, blocking the CWU’s planned 48-hour walkout which was due to start on 19 October.

But when you look at RMG, who is on its board of directors, and which company the major shareholder is, some light is shed on just why it is, as the CWU said, “out of touch” with its workers.

RMG applied for a court injunction on the basis that the CWU had breached the ‘Agenda for Growth’ agreement between the two parties. The document [doc] sets out the obligations of both RMG and the CWU in relation to industrial action. It states [doc p16] that ‘”external mediation” between the two parties applies when they:

Fail to reach agreement on a point of principle… it will be referred for external mediation after a period not exceeding one month from it being initially tabled by either party.

The document says [doc p17] that the agreement is “legally binding”. But the CWU claimed it had been trying to negotiate and find a solution to the dispute with RMG for 18 months.

It is the Agenda for Growth that RMG based its court request on. And the court seemingly agreed with RMG’s argument. But CWU General Secretary Dave Ward was unwavering:

On 3 October, the CWU announced that its members had voted in favour of industrial action. The ballot of its 111,082 members who work for RMG returned a result of 89.1% of members voting for industrial action, on a turnout of 73.7% – well above the 50% threshold now required by law. In making the ballot announcement, CWU General Secretary Dave Ward said [2:10] of RMG:

The company’s leadership… are completely out of touch with the workforce. And… we say this to Royal Mail… Unless you shift your position, significantly, very, very quickly, then industrial action is inevitable.

And while Ward asserts that RMG leadership is “out of touch”, a delve into RMG accounts reveals that, as with many corporations, it’s one rule for the bosses and another for the workers.

One rule for the bosses?

But in reality, and ironically, the largest group of shareholders is actually RMG’s own employees, CWU members, who own a 12% stake in the company between them [pdf p6]. They are, however, classed as individual investors.

The vote for strike action came after a sustained campaign by the CWU called ‘The Four Pillars’. It has been highlighting numerous areas in which it claims RMG is letting its workers down. The CWU says it represents:

As the CWU has outlined, the campaign is overarching, highlighting [pdf] RMG plans to:

A RMG spokesperson told The Canary:

Alongside RMG’s proposal for the best pension scheme in the industry – and one that compares favourably to other large employers – we are making a very good offer on pay. Royal Mail would continue to provide the best pay and terms and conditions in the industry. Many competitors pay around the National Living Wage. RMG pays 45-50% more than this.

But the pensions row is at the heart of the dispute. RMG wants to end the defined benefit pension scheme; which currently gives staff a fixed yearly payment when they retire, based on their average wage. It also wants to shift workers onto a defined contribution scheme, which guarantees that workers get what they paid in when they retire; but which links any extra money to investment performance.

RMG says it is doing this because of costs. But the CWU says the new scheme would mean workers losing a third of their final pension pot. And the two sides have been locked in a dispute over this for most of 2017.

But as is often the case, it is the workers who bear the brunt of what amounts to a private company raking in profits. Because the pension changes do not affect senior management, for example. They are on a different scheme; one which has been paying in £200,000 a year for some. And while the dispute has been going on, RMG has paid out £770m in dividends to shareholders.

A RMG spokesperson told The Canary:

We know how important pension benefits are to colleagues. We have never hidden the fact that benefits members build up in the future will be smaller than they are now. That is because, unfortunately, the Plan in its current form is unaffordable. If no changes are made, contributions to the Plan would more than double in 2018, from around £400m a year to £1.26bn a year.

We estimate that Plan members, who take the maximum tax-free lump sum at retirement would see an average reduction of 17% compared to current Plan benefits. We are one of the few companies offering to replace one Defined Benefit scheme with another. Under the Company’s proposals, RMG’s pension arrangements would remain the best in the industry.

On the subject of the ruling, RMG told The Canary:

We will now make contact with the CWU as a matter of urgency to begin the process of external mediation. The mediation process will take close to Christmas to be completed, and may be longer. The first step is selecting a mediator acceptable to Royal Mail and the CWU from a panel that was agreed by both parties under the Agenda for Growth.

The Agenda for Growth is a balanced agreement which gives significant protections to Royal Mail employees. In return, the CWU committed to an industrial stability framework with defined processes and strict timescales to resolve disputes. We want to use them to do just that.

[Royal Mail] deserve to be told, again and again, that they are completely out of touch with [members] views. So, let’s make sure that we stick together…

The CWU argument sums up the feeling among many workers in the UK. Because while bosses are enjoying bigger bonuses, bigger pensions and bigger dividends, their staff are having to fight for the crumbs off their tables. But with corporations now taking court action to block strikes, even when the Tories’ draconian trade union laws are met, it looks like workers will have to find other ways to fight for their rights.

Update: This article was updated at 2.05pm on Friday 13 October to reflect additional comments provided by RMG in addition to its original statement.

– Support the CWU campaign using the hashtags #FourPillars and #RiseUp.