A Conservative Party donor just broke ranks and went public. His takedown of Theresa May is brutal. - Canary 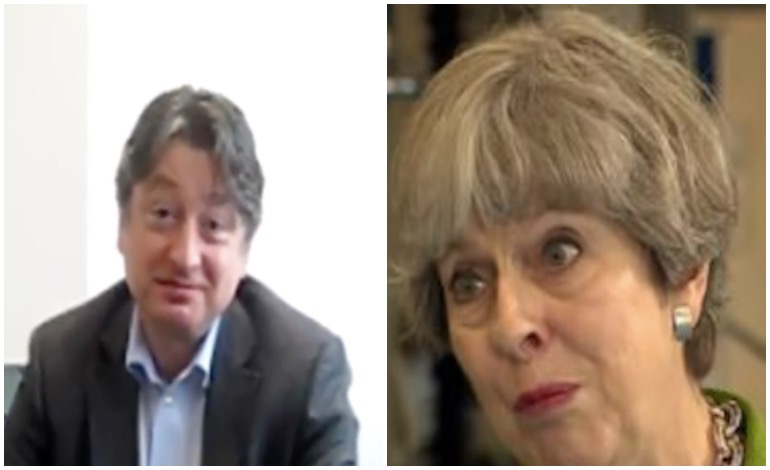 Conservative Party donor Alexander Temerko has said that the party must start looking for a new leader. Assessing Theresa May, Temerko described her as a “lame duck” and stated that the party is going through a “deep crisis”.

Direction over Brexit has caused huge divisions within the government and the Prime Minister has faced repeated criticism from her own party. But at the recent Conservative Party conference, she sought to build renewed support around her premiership.

Nevertheless, Temerko took the opportunity to undermine May, saying:

we must start the process of finding a new leader now.

And in a thinly veiled reference to May’s appointment as Prime Minister, he continued:

The millionaire businessman went on to highlight the importance of local elections for the government in May 2018:

If we lose these elections… then a change of leadership will be of critical importance again… And this time again we will either have to find a new leader in a hurry or continue to support a lame duck slowly approaching the edge.

You scratch my back

Temerko has long-established links with the Conservative Party. In 2012, David Cameron’s government gave Temerko’s company, Offshore Group Newcastle, a grant of £4.5m. Temerko and his company then donated £298,250 to the Conservatives in the year following the grant’s announcement. In recent years, his donations have totaled over £1m to the party and various Tory candidates.

Temerko said that the Conservatives are in “a deep crisis”. There is party division over Brexit. The Prime Minister has a weak government, propped up by the DUP. And now, in Temerko, a prominent party benefactor has publicly criticised May in a brutal takedown.

The crisis engulfing the Conservatives makes effective governance more difficult. With a weak parliamentary mandate, it was already a formidable task to govern. With a slowing UK economy and the Spring 2019 Brexit deadline edging closer, the UK faces an uncertain and worrying future.