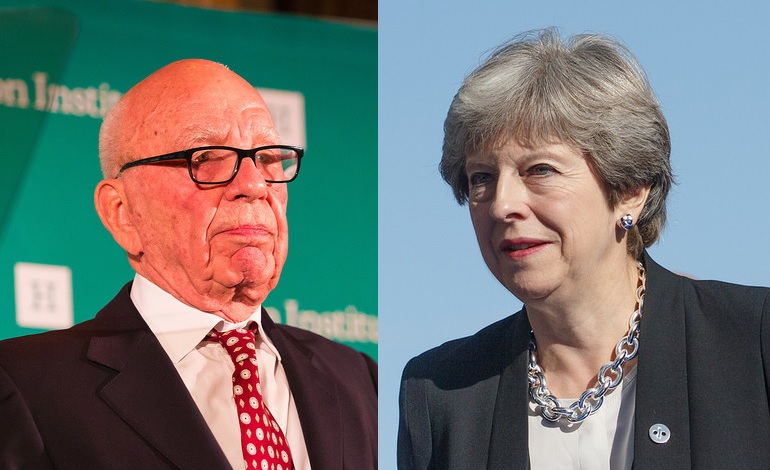 Prime Minister Theresa May held Christmas drinks on 18 December. It was the turn of journalists to schmooze with the PM and her ‘top team’ for the evening. The soirée attracted the likes of BBC Political Editor Laura Kuenssberg and Faisal Islam of Sky News.

But May’s bash didn’t attract as many media bigwigs as it might have. Because Rupert Murdoch decided to throw his Christmas party on the same night. So The Sun’s Political Editor Tom Newton Dunn and Editor of The Daily Mail Paul Dacre, among others, chose to raise a glass with Murdoch instead.

It seems strange that these allies wouldn’t coordinate their diaries to avoid an Xmas party clash. But perhaps not, considering May essentially branded Murdoch ‘the unacceptable face of capitalism’ the very next day.

Back in August, May tasked the Investment Association with creating a public register. This “name and shame” register exposes which companies have ignored shareholders and awarded high executive pay. Released on 19 December, the register has Murdoch’s Sky on it. Although Murdoch never succeeded in taking 100% control of Sky, he’s been the pre-eminent figure throughout the company’s history.

According to the register, 29% of Sky shareholders voted against handing chief executive Jeremy Darroch a £16m pay deal. And over 20% of shareholders opposed the re-election of Murdoch’s son James as a director.

When May announced plans for the register, she said:

Too often in recent years, we have also seen another, unacceptable, face of capitalism. A minority of firms are falling short of the high standards we expect of them.

When big businesses are brought into disrepute… it is bad for individual workers and companies, but also damages the social fabric of our country.

And now the register is public, we know that criticism applies to Murdoch’s company.

Murdoch doesn’t, however, have to care too much about criticisms levelled at Sky anymore. Because he’s on course to sell 21st Century Fox to Disney. This includes both the stake in Sky and the possibility of taking full control. Many, of course, will welcome the fact that Murdoch is relinquishing control of Sky News, as he has a stranglehold on the UK media landscape. But the mogul still rules over a third of the country’s national newspapers.

Perhaps that’s why the ‘kingmaker‘, who’s damaged “the social fabric of our country”, didn’t think twice about messing with May’s Christmas do.