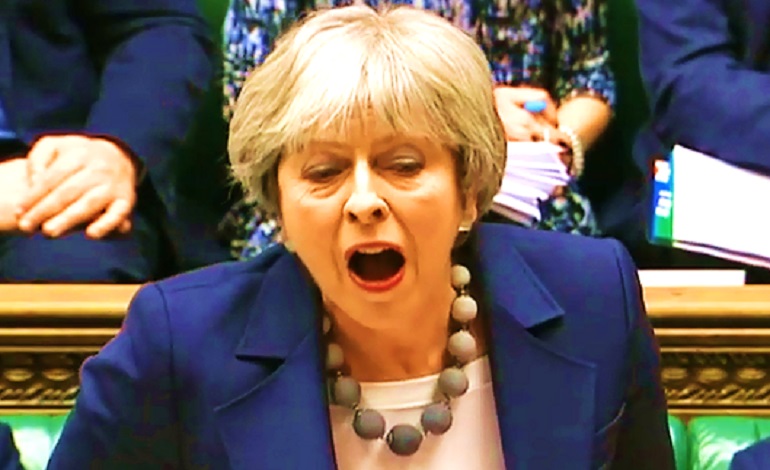 In the first Prime Minister’s Questions (PMQs) of 2018, Theresa May and Jeremy Corbyn could be forgiven for being a bit rusty after the Christmas break. But the PM went beyond rusty. She managed to dig herself into a rather large hole, and then quickly – and very awkwardly – had to try and climb out of it.

On Wednesday 10 January, Corbyn questioned May about the NHS. As The Canary has previously reported, the health service is currently in the grip of a “winter crisis”, although Health Secretary Jeremy Hunt has denied this.

But during the PM and the Labour leader’s exchanges, May referred to an interview that Shadow Education Secretary Angela Rayner had given to The Spectator. In the article, Rayner noted that, when it came to Labour’s economic policies:

We are in different times, radical times where we need to have a real investment in Britain’s future. Genuinely. I don’t mean that as a slogan, I mean it as an economic strategy.

It is a bit of a sh*t-or-bust strategy, I get that. It’s a high-risk strategy. But all of Britain’s great advancements in the past have been because we’ve had the gumption to take a risk.

But predictably, the PM tried to use Rayner’s comments out of context against Corbyn.

Unfortunately for May, it went horribly wrong:

People on Twitter were quick to react to the PM’s comments:

The Prime Minister attacking Angela Rayner for not turning up to PMQs, only to have to apologise after learning she is in hospital, really does take the biscuit. #PMQs

Even Isabel Hardman of The Spectator found it cringeworthy:

Oh jeez, now May has had to apologise for mocking Angela Rayner for not being at PMQs when she is in fact having medical treatment.

And The Mirror‘s political reporter Dan Bloom tweeted that:

Source close to Angela Rayner says Tory whips were aware that she was away because of “pairing” (where a Tory stands out of a vote to match a Labour MP who is unwell and vice versa). A bit embarrassing for May.

Rayner’s office told The Canary that she is on medical leave for the entire week.

May’s blunder about Rayner will not be quickly forgotten. But nor will the current winter crisis in the NHS, which was the real scandal of the first PMQs of 2018.