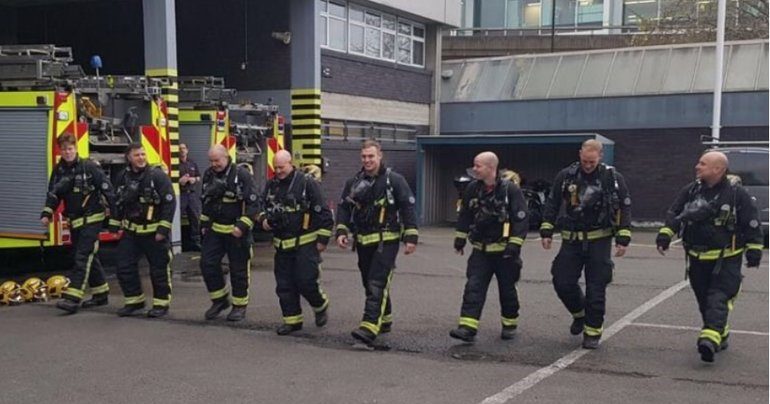 On 14 June 2017, A21 Paddington Red Watch were some of the first firefighters to arrive at the Grenfell Tower inferno. Six months on, they’re still fighting for the victims and the survivors.

The remnant of Grenfell Tower casts a shadow over Kensington and Chelsea. A giant metaphor for the price of austerity politics. An as yet unknown number of families were killed by the fire, apparently for the sake of a functioning sprinkler system and proper safety checks. It was firefighters who ran into the building to save people on the night, and firefighters who advocated passionately for the survivors in the aftermath.

Nevertheless, the tragedy left first responders traumatised; 60 counsellors were brought in to help firefighters work through mental trauma triggered by the inferno. But A21 Paddington Red Watch found an additional means of dealing with the pain.

Nine firefighters from the watch will be running the 2018 Virgin London Marathon in full firefighting gear, including breathing apparatus. This means they’ll be running the 25 miles wearing 30kg of kit. Those who can’t run are supporting the team with a fundraising effort that will go towards helping Grenfell survivors, and the firefighters who battled to save them.

In their own words

So far, the watch has raised over £22,000. And with the marathon not until 22 April 2018, there is still time to raise a lot more. On their crowdfunding page, the Watch writes:

As a watch we wanted to do something extra to raise money for the victims and families of the Grenfell Tower fire. Alongside The Firefighter Charity who have offered ongoing support to the firefighters who have suffered with issues with injury or PTSD following the fire…

We are very passionate about making sure this money gets to the locals and the people that need it. That is why we have chosen two local organisations that are at the heart of the Grenfell community. ‘The Harrow Club’ and the ‘Rugby Portobello Trust’. By committing to fundraising for these amazing charities we are ensuring there is help and support within the community for the people that need it…

Any support you can offer, no matter how small, will be greatly appreciated and we will make sure it goes directly to the victims and families of the Grenfell Tower community with the help of our chosen charities.

We encourage you to get behind the firefighters by taking the actions in the Get Involved section below.

– You can donate to the crowdfunding page here.

– You can show your support for A21 Paddington Red Watch on Twitter here.