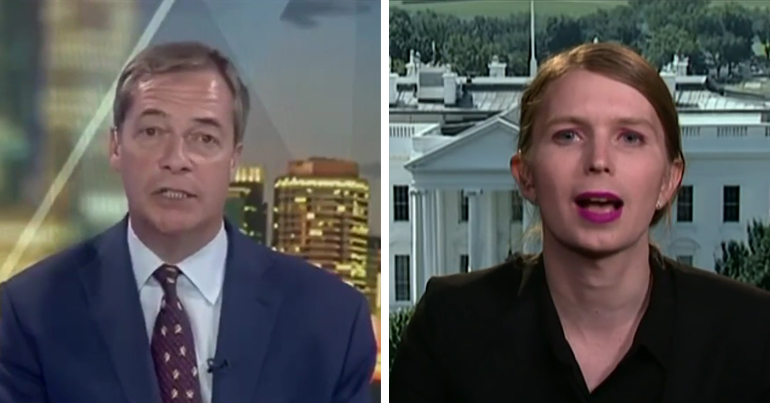 Nigel Farage started a speaking tour of Australia and New Zealand on 2 September, amidst protests outside the venue. His visit comes as US whistleblower Chelsea Manning’s entry to Australia remains in limbo.

Tour promoter GME Events describes the former UKIP leader as “one of the most influential” British politicians of the past decade. And tickets for the six-date tour range from AUS$89 to AUS$995 (£49 to £556). But on the first night in Perth, protesters chanted “Nazi scum” and “shame” at people entering the venue.

One woman was pictured holding a sign that said “Farage out Manning in!”. As The Canary reported on 31 August, Manning’s Australian visa was considered for refusal for not passing the ‘character test’. Australian authorities said this was due to her “substantial criminal record” for whistleblowing. WikiLeaks, which published Manning’s revelations, was quick to point out Manning has a military record, not a criminal record, for her actions.

Manning’s visa application was to cover a speaking tour across Australia and New Zealand. But the delay in approval meant she wasn’t able to attend the first date in person. Instead, on 2 September, Manning appeared at the Sydney Opera House event by video. At the time of publication her Australian visa remains undecided, though she has been approved by New Zealand.

The two decisions have been criticised by some as a double standard.

Links to the far right

Costas previously brought alt-right figure Milo Yiannopoulos to Australia in 2017. He is also responsible for a November 2018 tour by Gavin McInnes, founder of North American right-wing street gang The Proud Boys. Responding to allegations that The Proud Boys are a white supremacist group, Costas said:

During his Perth event, Farage referred to Donald Trump as his “friend” and described Stephen Yaxley-Lennon (AKA Tommy Robinson) as “brave”.