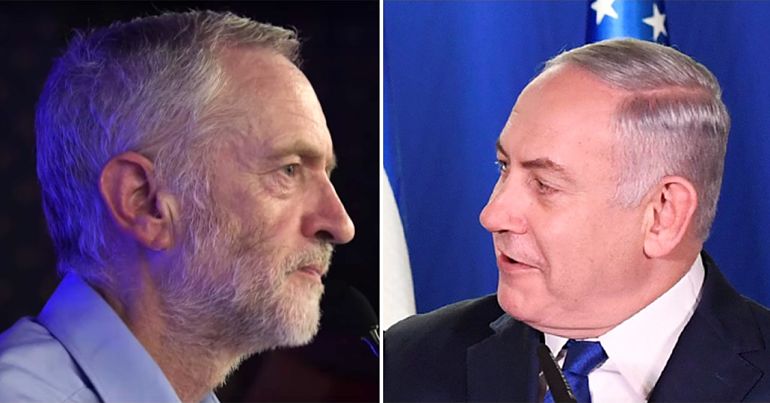 The Labour Party appears to be walking into a trap that could destroy Jeremy Corbyn. On 4 September, Labour’s national executive committee (NEC) is likely to adopt the International Holocaust Remembrance Alliance (IHRA) definition of antisemitism with all its examples.

If Labour adopts examples such as “claiming that the existence of a State of Israel is a racist endeavour”, the party’s own guidelines could equate certain criticisms of Israel with antisemitism.

Then, the state of Israel, the Labour right and the Conservatives will be able to use the party’s own rules to generate endless antisemitism claims against Labour members, Palestinian activists and the Corbyn-led movement. The Labour Party’s interpretation of the definition is irrelevant: only the interpretation of the accusers matters. As we have seen, the mainstream media will report on antisemitism allegations against Corbyn’s Labour with little regard for the truth.

The IHRA definition and examples will not only damage the Corbyn-led movement and the quest for justice for the Palestinian people but will also undermine genuine instances and genuine concerns about antisemitism in Labour and wider society.

The definition as an Israeli state weapon

The IHRA definition lays out authentic examples of antisemitism. But the definition in full seems to be a weapon to smear critics of Israel as antisemitic and shut down debate. And Corbyn, a stalwart supporter of Palestinian rights and leader of a party close to entering government in the UK, is now a serious threat to Israel’s occupation. Al-Jazeera documentary The Lobby exposed attempts to undermine Corbyn stemming from the Israeli embassy in London.

We can see that the definition can be a weapon firstly from its roots and secondly from how it’s already been used.

The roots of the weapon

The definition originates from Israel’s offensive against its international critics.

In 2004, Israeli academics proposed “creating a new definition of antisemitism that would equate criticisms of Israel with hatred of Jews”, in the words of Jerusalem-based analyst Nathan Thrall. One of the academics was Dina Porat, who had been a delegate for Israel’s foreign ministry at a 2001 UN conference.

The academics’ work formed the basis of the European Union Monitoring Centre’s (EUMC) working definition. And pro-Israel lobbyist Rabbi Andrew Baker was the driving force that brought the tool onto the EUMC. But the definition failed to make international strides and the EUMC never fully adopted it, following widespread criticism.

That’s until 2015 when Porat co-chaired a conference in Jerusalem, which Israel’s foreign ministry sponsored. The conference recommended: “that the Working Definition of Antisemitism should be reintroduced into the international arena with the aim of giving it legal status”.

Why the International Holocaust Remembrance Alliance (IHRA) adopted the definition

As chair of IHRA’s committee on antisemitism and Holocaust denial, senior pro-Israel lobbyist Mark Weitzman was best placed to give the definition an international status.

Convincing the 31 member countries of the IHRA to adopt the working definition took “approximately three years of intense political activity”, Weitzman says. Winning the argument was possible because only 26% of those countries even recognise Palestine as a state and those that do mostly aren’t strong on Palestinian rights. And within each member country, IHRA delegates are government ministers or appointed by governments that don’t recognise Palestine. In short, there is no substantial Palestinian representation on the IHRA.

By contrast, 71% of UN countries recognise Palestine. So the widespread affirmation that the definition is ‘internationally recognised’ should be disputed. It’s recognised mainly among the minority of countries that don’t acknowledge Palestine.

Framing it in terms of the global rise in antisemitism and the real issues surrounding that, Weitzman was able to get agreement on the definition. The IHRA officially adopted the definition in May 2016.

The appearance of legitimacy

However you slice it, the IHRA definition is not really endorsed internationally.

Still, the IHRA’s adoption of the definition gives it an appearance of legitimacy. And that’s good enough for the establishment media. Even the so-called liberal Guardian has published around 40 stories on Labour’s ‘antisemitism crisis’ in the past month.

The Israeli government lauded the adoption of the definition, saying:

the main innovation in the working definition is that it also includes expressions of Antisemitism directed against the State of Israel, when it is perceived as a Jewish collective

In other words, people can be branded antisemites for talking about Israel rather than specifically about Jews.

How the weapon works – the practical application

The definition contains a number of examples of genuine antisemitism, like “Accusing Jews as a people of being responsible for real or imagined wrongdoing committed by a single Jewish person or group, or even for acts committed by non-Jews”.

But other examples, particularly “claiming that the existence of a State of Israel is a racist endeavour”, are ripe for being used as a weapon to smear critics. 24 Palestinian organisations, trade unions and networks in the UK have said:

Kenneth Stern was a lead EUMC author of the working definition in 2005. He has fiercely criticised what the definition has become, saying that he never intended:

But, in line with Israel’s original aim, that is exactly what the definition has been used for. Stern himself says:

The EUMC’s “working definition” was recently adopted in the United Kingdom, and applied to campus. An “Israel Apartheid Week” event was cancelled as violating the definition. A Holocaust survivor was required to change the title of a campus talk, and the university mandated it be recorded, after an Israeli diplomat complained that the title violated the definition. Perhaps most egregious, an off-campus group citing the definition called on a university to conduct an inquiry of a professor (who received her PhD from Columbia) for antisemitism, based on an article she had written years before. The university then conducted the inquiry. And while it ultimately found no basis to discipline the professor, the exercise itself was chilling and McCarthy-like.

As well as providing a means for the UK and Israeli establishment to smear the Corbyn-led movement, the adoption of the definition could discourage people from speaking out against Israel in the first place. This is known as the ‘chilling effect‘.

The definition also appears to place the onus on the accused to somehow prove they aren’t antisemitic. Rather than the accuser showing antisemitic intent.

It will never end unless Corbyn resigns

Leading anti-Corbyn MP Margaret Hodge finally admitted on 2 September that the ‘antisemitism crisis’ is predominantly a coup. Hodge said that adopting the definition in full wouldn’t be enough, spelling out that:

Labour is poised to adopt the definition and examples, likely with some additional guidance in an attempt to protect freedom of speech. Both Labour Against Antisemitism and Blairite group Progress have also indicated that the way Labour adopts the definition won’t be enough. For the anti-Corbyn informal alliance, removing Corbyn will always be the ultimate aim.

Why toppling Corbyn is vital for the establishment

The UK has a permanent seat on the UN security council and is home to powerful multinational corporations and a top global finance industry. For the Israeli government, the prospect of having a prime minister of the sixth largest economy who genuinely supports Palestinian self-determination is enemy number one.

Similar can be said of the UK establishment. For example, the UK’s overseas territories are the world’s largest network of tax havens. The idea that a genuine internationalist progressive could be UK prime minister is unacceptable to the majority of ruling institutions.

The IHRA does very important work, for example, on ensuring that countries educate children about the Holocaust and other genocides. But its lack of Palestinian representation has led the IHRA to give powerful legitimacy to a potential pro-Israel weapon that threatens free speech, smears critics and obscures genuine antisemitism.

If Labour adopts the definition in full, the Israeli and UK establishments will be able to use it to accelerate the ‘antisemitism crisis’ even further. The Labour leadership would be wise to resist. And instead, launch an online and offline onslaught against the media and the other withering establishment institutions, with the 2017 manifesto front and centre. Stop playing their games before it’s too late.