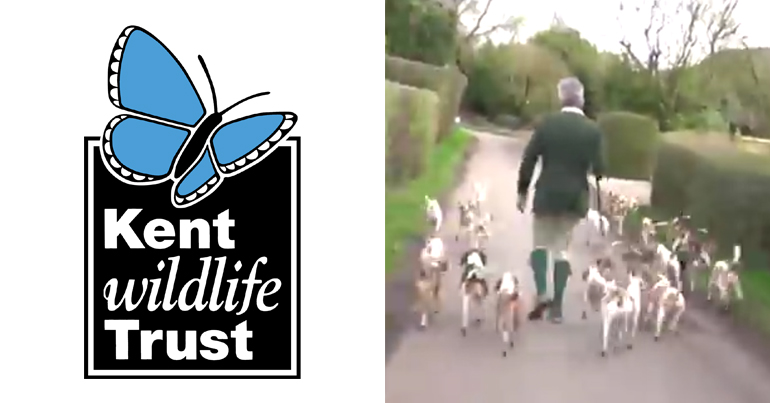 UPDATE: The text has been updated to include a response from House & Hound.

Kent Wildlife Trust (KWT) is set to face protests at its AGM – by wildlife campaigners. They claim the chair’s connections to game shooting and hunting make him unfit for office. And they want him gone.

A storm began in March 2017 when it emerged that Mike Bax, KWT chair, had been the master of a hunting pack, the Blean Beagles. And in April 2017 it emerged Bax allowed pheasant shooting on his land. Campaigners argued these two connections represented a “conflict of interest” with his position as KWT chair and campaigned to have him ousted.

Bax’s connection with shooting is undisputed. Responding to the allegations, KWT said:

Mike Bax purchased Street End Wood, next to his farm, in 2007 at which time the local shoot was already in place. It has continued with his permission but he plays no part in its management, nor does he receive income from it.

But a petition to remove Bax from his position said:

Allowing the shoot to take place in the first place is management in itself. He has the power to stop it and he doesn’t.

The petition also points out that in 2016 Bax personally conducted an auction for game shooting. It included a £1,600 winning bid to shoot ducks on the Isle of Sheppey, Kent. This connection has formed a key pillar for the campaign against Bax.

Chris Luffingham, director of campaigns at the League Against Cruel Sports, told The Canary:

It is deeply concerning that somebody who permits pheasant shooting on their land remains Chairman of the Kent Wildlife Trust, in clear conflict with the charity’s commendable work to protect wildlife and the habitat which sustains it.

The release of large numbers of non-indigenous ‘game’ birds, which have been factory farmed for the gun, inflicts clear damage on wildlife and the environment. Not only does this invasion of pheasants into the British countryside displace native birds and upset the delicate ecology, but further introduces disease and threatens rare butterfly species. Natural predators including foxes, stoats and weasels – drawn in by the prospect of a ‘free lunch’ – are subsequently trapped, snared and shot.

Had Mike Bax permitted the release of equally-damaging mink into the Kent countryside, would he still remain Chairman of the Kent Wildlife Trust? I suspect not.

While KWT has taken a neutral position on Bax’s connection with the shooting industry, it has denied campaigners’ claims of his long-term involvement with hunting. But evidence suggests otherwise.

Mike Bax has been open about his involvement with Blean Beagles. He says he was one of seven joint masters until the 2005 introduction of the Hunting Act. After this, beagling – hunting hares on foot with a pack of beagles – became illegal. KWT said, Bax:

has had no role in the Blean Beagles’ affairs since then.

Campaigners have provided evidence that suggests this isn’t true. They point to Baily’s Hunting Directory, which began in 1897 and has long been seen as the ‘bible’ for information about hunting packs. It describes itself as:

the best and only comprehensive listing of packs of hounds of all types from around the world.

Hashman has provided The Canary a photo of the directory in question:

Joint masters are integral to a hunt. They provide financial backing for a pack and liaise with local landowners to secure areas for hunting. Joint masters also join a pack out hunting.

KWT stated in April 2017 that this directory “says correctly that… Bax is a former master”. But the 06/07 directory clearly lists Bax as a joint master. The preceding entry in the image shows there is a separate section for former masters. It also lists Bax’s business partner Stuart Sillars as huntsman and joint master. At the time of publishing, Sillars is still involved with Blean Beagles.

But this wasn’t Bax’s final appearance in Baily’s Hunting Directory. After 2008 the listing stopped print publication and moved online. And campaigners claim Bax was listed as joint master in 2016.

In a message seen by The Canary, one campaigner claimed Bax was still listed as a joint master as late as March 2017. Responding to this in April 2017, KWT said:

Baily’s Hunting Directory states there are two ways to edit its online listing. First is to submit an amendment, which is then verified by the website’s team before publishing. Second is by the master or huntsman, who is provided with a PIN unique to each hunt.

The Canary contacted Baily’s Hunting Directory about this case but by the time of publication, it hadn’t responded.

Contrary to KWT’s statement, the Baily’s Hunting Directory listing is not an isolated entry. Following the end of its print run, equestrian lifestyle magazine Horse & Hound began its own print-version hunt listing. And this, too, listed Bax as a joint master of Blean Beagles for several years:

The Canary asked Horse & Hound about how its information was gathered. The current hunting directory editor said she couldn’t comment on the 2012-15 period as she wasn’t editor at the time. She did confirm that all information is initially supplied by the hunt itself. There is no apparent link between the two directories..

KWT failed to address Bax’s appearance in Horse & Hound in both its April 2017 and July 2017 statements. And when The Canary approached KWT about this and Baily’s Hunting Directory, it said:

I will refer you back to the statement that was made in July of last year. Kent Wildlife Trust stand by this statement. There is nothing else we can add to that statement at this point.

Beagling packs are secretive. In his 2016 speech, Hashman said:

Beagling has long been a closed shop to outsiders, an activity which requires you to have references and referees to vouch on your behalf before you’re allowed to join in. Beagling takes place mostly on remote or private land which means that it’s virtually impossible to monitor.

As a result, the legality of Blean Beagles’ activity is unknown. A request by Hounds Off to monitor the pack during its 2017/18 season went unanswered. And visits by East Kent Sabs in previous years have seen Blean Beagles pack up as soon as they were monitored, or even before they could start hunting.

Bax’s association with the pack, therefore, remains highly questionable. Especially since he was still listed as joint master as late as 2015 and, by some reports, until 2017.

The brown hare is considered a priority species by Defra’s Biodiversity Action Plan. A priority species is one “identified as being the most threatened and requiring conservation action”. KWT’s own stated goal is to “ensure that wildlife is protected and restored”. The presence of a senior official with clear connections to the shooting industry and strongly implied connections to hare hunts contradicts this.

On 29 September, campaigners will come together outside KWT’s 2018 AGM to call for Bax’s resignation. A Facebook page for the event says:

This is not an anti Kent Wildlife Trust protest by any means, it is simply so that people can express their outrage that hunters or shooters can be given positions of such power in our Wildlife Trusts!

For the charity to remain true to its values it must do more than rely on a statement that’s full of holes. KWT must listen to its members and campaigners.

– Join the demo outside KWT’s AGM.