A Department for Work and Pensions (DWP) policy that a court ruled breached UN regulations is now under investigation by parliament. It comes after a previous inquiry had to be stopped due to the 2017 general election. But if you want the committee to hear your views on the policy, you have to submit them by 10 September.

The benefit cap is one of the DWP’s most controversial policies of the past eight years. It limits the amount of certain benefits and tax credits the DWP gives to a household; it only applies if a household is claiming Housing Benefit or Universal Credit.

But claimants have taken the department to court three times since the coalition government brought in the policy in April 2013. And in one of those cases, judges ruled the cap breached the UN Convention on the Rights of the Child.

Maximum amounts the DWP will give people under the cap are:

The cap was originally higher than this, but the previous Conservative government changed the amount in its 2015 budget.

Now, the Work and Pensions Select Committee is relaunching its inquiry into the cap. When you look at the DWP policy in detail, it’s clear why the committee wants to see if the cap works in the way it should.

The reality behind the figures

But the policy seems to be disproportionately hitting lone parents. As of May 2018, 72% of households the DWP capped which claimed housing benefit were lone parents, often with young children:

And overall, the DWP was mostly capping households with children: 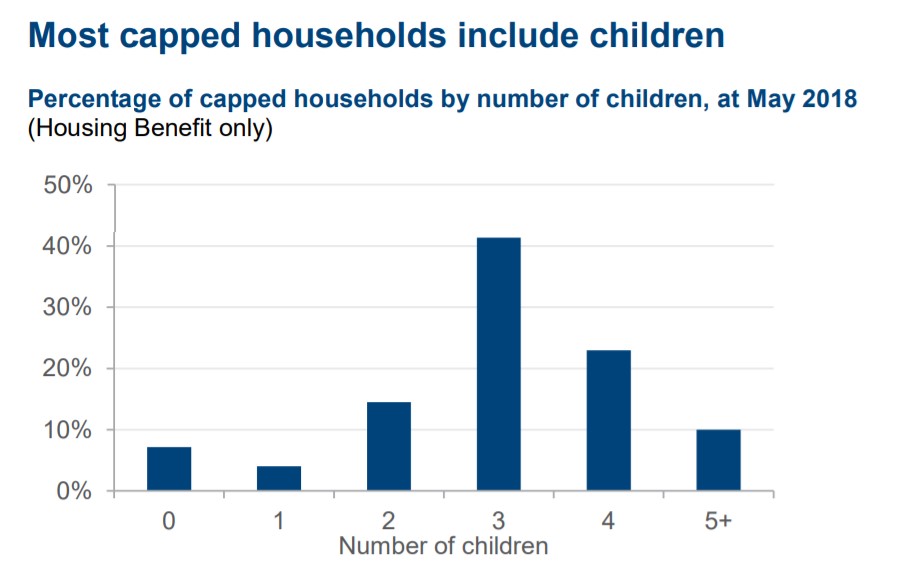 It was the impact of the cap on children which led to judges ruling in 2015 that the DWP was breaching UN rules.

Two lone mothers took the DWP to court, arguing the cap was discriminatory and unfair. As the Guardian reported, the judges didn’t find the cap unlawful. But they did say that then work and pensions secretary Iain Duncan Smith (IDS) had failed to:

show how the cap was compatible with his obligation to treat the best interests of children as a primary consideration.

One of the judges also said:

The prejudicial effect of the cap is obvious and stark. It breaks the link between benefit and need.

Claimants affected by the cap will, by definition, not receive the sums of money which the state deems necessary for them adequately to house, feed, clothe and warm themselves and their children.

IDS, though, hailed it as a victory, saying:

I am delighted that the country’s highest court has agreed with this government… that the benefit cap is right and fair.

But IDS and the DWP have not convinced the Work and Pensions Select Committee about the merits of the cap. So it’s now taking evidence for its official inquiry into it. The deadline for submissions is 10 September:

We're inquiring into the effects and impact of the #benefitcap – read our news story https://t.co/Hxp5eqezpl #benefits #budgeting #jobsearch

Send us your views on this question and the others in our inquiry https://t.co/ng0iCkiEkv by Monday 10 September pic.twitter.com/NtQuvrALTh

The cap is intended to incentivise behavioural change amongst claimants and secure savings for the Exchequer. The re-opened inquiry seeks to establish to what extent is it achieving that.

It will also look at whether there the cap has any “unintended consequences”; the breaching of a UN convention is certainly one of them. Meanwhile, the UN is also running an inquiry into the impact of austerity over the past eight years in the UK; with welfare policy being specifically looked at.

So if you’ve been hit by the benefit cap, tell the committee what you think of it; and also tell the UN, too (here). Because the more evidence against the DWP, the better.

– Support the blogs Universal Credit Sufferer and The Poor Side of Life.

– Get involved with Disabled People Against Cuts (DPAC), fighting for disabled people’s rights.