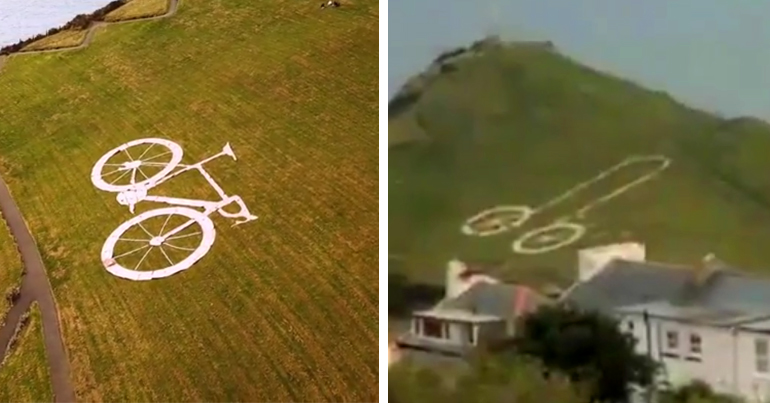 A community group hoped to get Ilfracombe in Devon onto the TV with its plastic recycling stunt. And it did hit the news. But for a very different reason.

Plastic Free North Devon created a large bicycle outline on Capstone Hill on 3 September. It used material collected during beach cleans. And the group intended it to represent the efforts of North Devon communities to reduce single-use plastics.

The hill artists chose a bicycle because on 3 September the Tour of Britain passed through Ilfracombe. Plastic Free North Devon said, “it might even win @tourofbritain land art competition”. And the group hoped television cameras would capture its art piece. But bad weather meant the helicopter missed Capstone Hill.

However, the artwork hit the headlines later, when it became a giant penis. A prankster rearranged the frame and handlebars into a shaft. The wheels remained as balls.

Pranksters have turned a giant bicycle created to celebrate the Tour of Britain on a hill in Ilfracombe, Devon, into a giant penis https://t.co/uyfi66baoD pic.twitter.com/gJEJag33TA

The bike was designed to highlight the great work of the Plastic Free North Devon organisation in helping to clean our beaches and encourage people to cut out single use plastic as much as possible.

And on Facebook, the group used the prank to highlight the effect of plastics on male fertility. It linked to a 4 February Telegraph article about a study into Bisophenol A. This chemical is in household items including till receipts, water bottles and containers. And the study, involving Devon students, showed links to decreased sperm count.

Researchers have discovered plastic pollution in our food and even bottled water. And the University of Hawaii recently showed it contributes directly to climate change.

People have now removed the artwork. It’s unknown if the bike or the penis are in the running for the Tour of Britain competition.