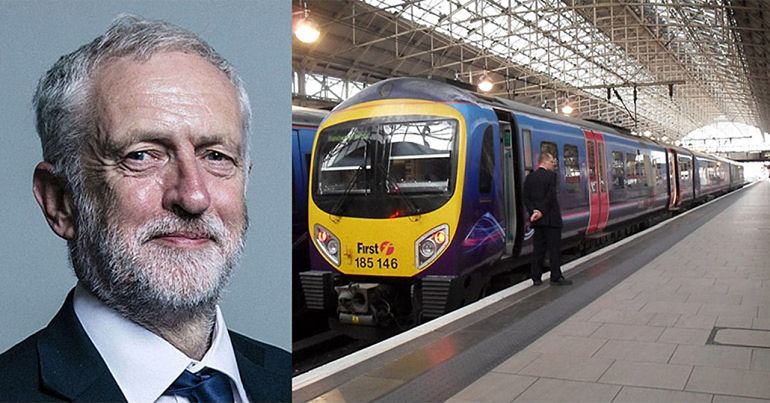 From sticking it to Virgin boss Richard Branson during the Traingate ‘scandal’ to sitting behind the wheel of a Bombardier, many of Corbyn’s most endearing moments have occurred along Britain’s railway network.

But the Labour leader reached peak ‘Corbyn on a train’ on 3 September when he offered to bail out a passenger who had bought the wrong ticket – by offering to pay the extra train fare himself.

On the right tracks

The incident happened as Corbyn set off around the country to promote the “Crossrail for the North” project, pledging to deliver on a series of upgrades to east-west transport links and nationalise Britain’s railway companies.

Labour has proposed to invest £10 billion into the project, which the party has said will kick-start the revitalisation of transport infrastructure in northern England, and create some 850,000 jobs by 2050.

Ahead of his trip, Corbyn hit out at over-crowding, delays, cancellations, and what he has dubbed “Tory Rail Mayhem”.

And Corbyn’s prophetic words were confirmed when a journalist from the Liverpool Echo, sent to interview Corbyn, found himself with an invalid train ticket.

Labour had invited journalist Liam Thorp to join Corbyn on a stretch of his journey to talk about the Crossrail project among other topics.

Rushing to catch the train at Liverpool Lime Street, Thorp quickly bought an off-peak day return from Liverpool to Manchester before sitting down with the Labour leader aboard the TransPennine Express service.

But when the conductor asked for Thorp’s ticket, he realised he’d bought one that was “Valid only on Northern Trains services.”

According to the conductor, he either had to get off at the next station – or pay £2.20 to continue to his destination.

This is when Corbyn stepped in and offered to spot Thorp the extra cash.

How @JeremyCorbyn offered to save the day after my train ticket mix-up – and what it tells us about our complex rail system https://t.co/Q9kHz8FCCW pic.twitter.com/H9ZDY7qqDn

Thorp, who openly admits that he was at fault, ended up paying the extra fee himself despite the Labour leader’s kind offer. But it goes to show the complexity of buying a train ticket in 2018 and how easy it is to make a mistake when commuting. Twitter was quick to testify to the truth of this:

Love this video, thank you. Really shows how ridiculous the railways are at the moment.

This is such a good example of why this man should be PM, he understands the sheer frustration of people that have to function outside of London and for who the lack of money is not an obstacle in there everyday lives.

Great example, whenever I get on a train now I am always worried stiff, that will happen to me. Until inspector comes and okays my ticket, I can breath again ! Nationalise them I say !

Mixing up tickets and paying an extra £2.20 for a train ride is the least of the UK’s railway woes. According to Labour, cancellations and significantly late arrivals have increased by 50% since the Tories took power in 2010. Overcrowding on trains has also gone up by over 25% on the ten busiest peak-time routes.

And even parliament’s transport committee has concluded that the current private system is “no longer fit for purpose.”

With that in mind, it’s quite clear that now is the time to renationalise our railways. It will mean less time spent searching for the correct tickets, the protection of jobs, and fairer pricing. And on top of all that, it will inevitably lead to more fantastic photos of Corbyn on a train.

Corbyn loves trains so much he even manages to look happy on a grotty old Northern Rail rattler. Surely this is some sort of world first pic.twitter.com/RsT5pF3o45