Massacre of workers revisited, as TUC issues Brexit ultimatum to Theresa May - Canary 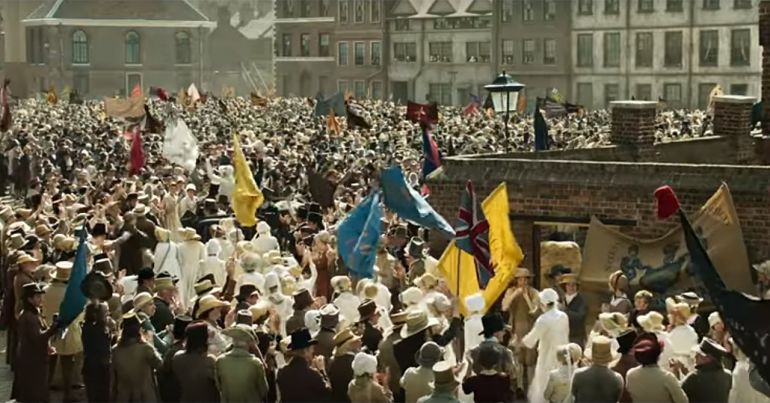 Trades Union Congress chief Frances O’Grady put Theresa May on notice when she announced that the TUC will back a #PeoplesVote if the Tory government’s Brexit deal does not benefit workers, or promote peace in the north of Ireland.

Frances O'Grady – Prime Minister if you come back with a deal that doesn't put workers 1st… then I'm warning you we will throw our full weight behind a campaign & demand that the terms of the deal are put to a popular vote. #PeoplesVote. #FBPE #TUC150 pic.twitter.com/8nDiTOORhD

The problem with Brexit from the outset is that it was never clearly defined. And so the number of interpretations of what it means has largely reflected ideological interests across the political spectrum. But as the many consequences of Brexit have been revealed over time, it was inevitable public opinion would change.

Indeed the latest survey by YouGov shows that those who wish to remain in the EU are now in the majority.

Meanwhile there are concerns that the chaos that could ensue from a crash out of the EU would see food and other shortages, as well as civil unrest:

The same happened in 1819, when hundreds of thousands of people staged protests around the country to demand a vote and an end to parliamentary corruption. And in August of that year, 60,000 protesters marched on Manchester to gather at St Peter’s Fields.

The protesters were confronted by “600 Hussars, several hundred infantrymen; an artillery unit with two six-pounder guns, 400 men of the Cheshire cavalry and 400 special constables [waiting] in reserve” as well as yeomanry. In the ensuing carnage, eighteen protesters were killed and around 700 injured.

Subsequently, on hearing of the massacre, the poet PB Shelley angrily penned a poem, The Masque of Anarchy, which ends with the oft-quoted lines:

Rise like Lions after slumber
In unvanquishable number,
Shake your chains to earth like dew
Which in sleep had fallen on you-
Ye are many – they are few.

The TUC challenge to the government over Brexit is also a reminder of the age-old question: with whom does sovereignty ultimately lie – the people or parliament? Right now, evidence suggests that the majority of trade union members polled support a #PeoplesVote on the final Brexit deal.

And another poll indicates that if Brexit proceeds, the majority of people in Scotland would opt for independence and the majority in Northern Ireland would seek Irish unification. With regard to the latter, Sinn Fein has already asked the EU to ensure that EU representation continues north and south of the current border – “from Derry to Kerry”.

O’Grady’s ultimatum to May comes as we near the 200th anniversary of the ‘Peterloo Massacre’. Peterloo, a feature film about the massacre is due to be released in November:

Actor Maxine Peake, who stars in the film, commented:

I may be being a bit of a scaremonger, but I feel it might not be long before we have another Peterloo incident. You look at events like Grenfell and Hillsborough, where working-class people were ignored and disrespected by those in charge and there were huge cover-ups.

And it may prove to be significant should the film about Peterloo coincide with a general election.

– Read more in The Canary about Brexit.