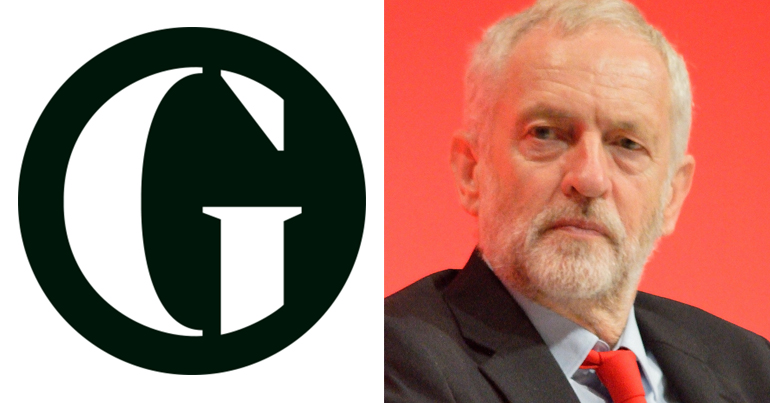 On 16 September, FiveFilters – which “promotes non-corporate, independent media” – published a run down. It included more than 100 times the Guardian had linked Jeremy Corbyn to antisemitism. The earliest piece included went out on 26 September 2017. The 107th and latest article was put out on 9 September 2018. The collection, FiveFilters said, is to show:

just how dedicated the paper has been in spreading these spurious charges of antisemitism.

FiveFilters also points to a claim made by investigative journalist Patrick Elliot. The Guardian was, Elliot said, the first UK national paper to have “Corbyn” and “antisemitism” in the same sentence. That article was published on 13 August 2015. And it followed a Jewish Chronicle front page that had linked Corbyn to Holocaust deniers and antisemites the day before.

The Canary asked FiveFilters why it described the Guardian‘s link between Corbyn and antisemitism “damaging”. It said:

We think it’s damaging because Corbyn is so clearly not a racist. The charges are, as Noam Chomsky and Norman Finkelstein have pointed out, intended to contain the ‘threat’ that a party could emerge that opposes militarism and supports the Palestinian cause. Thankfully, a lot of people are beginning to understand the propaganda role of the corporate media… But there are still many who will believe that Corbyn and Labour really are in the midst of a huge antisemitism crisis.

And The Canary asked why Guardian backing for this link is worse than right-wing outlets doing the same. FiveFilters said similar stories from the Daily Mail or Telegraph aren’t as damaging because:

those papers’ readers aren’t typical Corbyn voters. As Jonathan Cook pointed out, the Guardian is essentially the “house journal of the left”, so it has far more influence among people who would be likely to vote for Corbyn.

A 2018 Ofcom survey showed Guardian readers are more wedded to the paper than readers of other titles. It said 82% believed the Guardian to be high quality, while a similar figure said it helped them “understand what’s going on in the world today”.

The Canary asked FiveFilters if the large number of Guardian articles it lists might be the result of the paper’s large output. The group said it had done searches on newspaper database ProQuest.

Before May 2015, the Guardian had just one article that mentioned both Corbyn and antisemitism. This sole piece made no accusations. After May 2015, there were 216 results for “Corbyn” and “anti-semitism” – and 291 including the Observer. Many of these included accusations, such as the 107 mentioned above.

FiveFilters then pointed to more information by media analysis website Media Lens. It said on 12 September that this jump wasn’t necessarily related to Corbyn’s prominence. There were 3,659 ProQuest hits for Corbyn before May 2015, though it doesn’t mention how many of these are by the Guardian.

The Guardian is committed to fearless, independent journalism that holds those in power to account – this includes the accurate reporting of the daily political news and events. We also publish a wide range of different opinions and encourage debate.

Antisemitism is a very real problem in the UK. Its presence across our society means Labour isn’t free from it. But the media focus on Labour has greatly outweighed the number of instances recorded. Corbyn said that those cases represent just 0.1% of Labour members; although he emphasised that “one is too many”.

On 27 September, Media Reform UK released a report that said the media wrongly reported on antisemitism in the Labour Party. And the Guardian is named as one such culprit. But it’s not just media analysts that have questioned the Guardian‘s stance. Plenty of readers, including those on the left, have started to wonder what role the newspaper really plays.

That’s why the #BoycottTheGuardian Twitterstorm will be an important moment. It will display, in public, a growing suspicion of the newspaper’s relationship with the powerful. And it’s something we can all take part in.

– Join the Twitterstorm between 7pm and 9pm on 27 September.

– Read FiveFilters‘ first run down of Guardian attacks on Corbyn.

– Read about why The Canary believes the work we and other alternative media do is more important than ever.

– Support The Canary and help us hold establishment media to account.