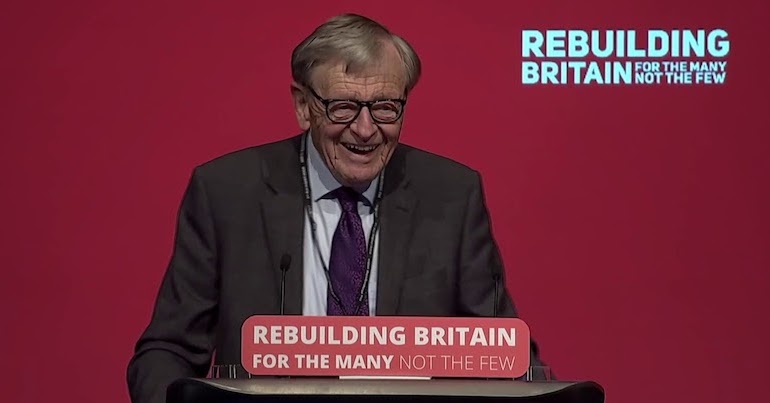 On 25 September, Lord Alf Dubs addressed the Labour Party conference. Dubs came to the UK as a child refugee and has become a champion of rights for today’s refugee children. And his speech gave new hope that, under a Labour government, thousands of refugee children might finally have the chance of safe passage.

Speaking to Labour delegates, Dubs offered a moving ray of hope. He made it clear that, under a Corbyn-led Labour government, more child refugees could travel safely to the UK and would be welcomed:

From a child refugee – to a member of the House of Lords, championing the rights of child refugees like himself.
Watch this wonderful clip from Lord Alf Dubs ? #Lab18 pic.twitter.com/15IAKBN3BE

What Dubs proposed is, in his own words, “very simple” – to “welcome 10,000 unaccompanied refugee children over the next 10 years”:

Privileged to address #LabourConference2018 on child refugees. This year is the 80th anniversary of the kindertransport. I am calling on the UK government to mark this important anniversary by committing to welcome 10000 unaccompanied refugee children over the next 10 years pic.twitter.com/c61yh0mrCv

what we’d like is for a Labour government – a Tory government if they’ll do it, but they won’t – … [to] make a commitment that 10,000 unaccompanied child refugees should be brought over to Britain from Europe… – I’m being very modest – over a five-year period… that’s three per local authority per year.

That’s not very much… it’s almost too little… It is actually shameful that such modest requests are ones that no British government under the Tories can achieve or is willing to achieve.

In 2016, Dubs proposed an amendment to ensure that lone children fleeing war and conflict could travel safely to the UK. Known as the ‘Dubs Amendment’, it established a legal way “to relocate and support unaccompanied refugee children from Europe”. This was intended to help “3,000 children from war-ravaged countries”.

Dubs explained that, in 2016, then home secretary Theresa May asked him to withdraw the amendment and said: “If we take these children, others will follow”. He ignored her, and the amendment passed through the Lords.

A crisis we can’t ignore

So Labour’s pledge to help child refugees is crucial.

According to charity Help Refugees, there are “currently 95,000 unaccompanied refugee children living in Europe”. And as Dubs previously said, refugee camps “are no place for adults let alone unaccompanied children and teenagers”. And without “safe and legal routes”, children face even greater dangers from smugglers and traffickers.

As The Canary previously reported, ‘living’ conditions for refugees in Europe have also deteriorated even further. There are currently no rescue boats in the Mediterranean.

This month marked three years since Alan and today we get another reminder that little has changed. A boat carrying Syrian and Palestinian refugees capsized off the coast of Lebanon. "Rescuers retrieved the body of a five-year-old child."https://t.co/3khAqoSWtf

However much the Tories ignore this crisis, it hasn’t gone away. For thousands of unaccompanied child refugees, a Labour government offers at least some hope. So we need change and we need it now.

As Dubs says, it really is very simple.

–  Write to and email your MP to demand that they take action to end the refugee crisis.

– Support the work of groups like Safe Passage, Help Refugees and Refugee Action.