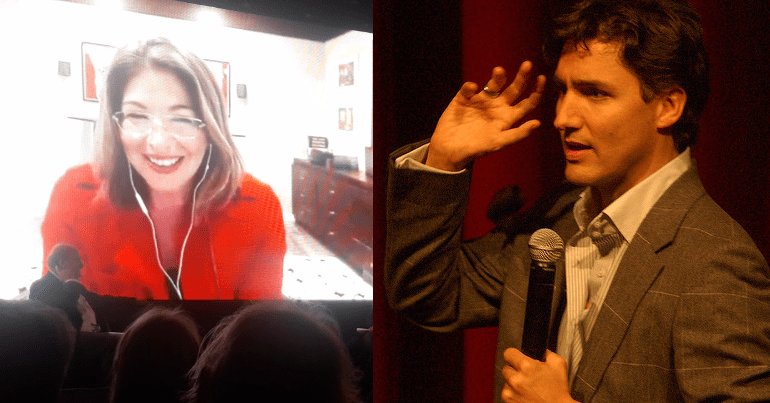 Speaking via video-call at the event, Klein laid out how “pseudo-progressives” like Trudeau can exploit Donald Trump’s presidency in the US:

The moral hazard of Trump for… pseudo-progressives like Canadian prime minister Justin Trudeau, for instance, who’s able to position himself as an anti-Trump by sending out a few memes, right? But his climate record is absolutely abysmal. He purchased an oil pipeline in order to push it through against the express demands of indigenous people for that pipeline not to cross their territory.

The author of The Shock Doctrine pointed out that Trump can make pro-establishment liberals look progressive when, in reality, they are pushing economic and environmental policies in a similar direction to the White House. And the fact that Trudeau spent $4.5bn of taxpayer money to roll out an oil pipeline is far from the only issue. As Montreal-based journalist Martin Lukacs laid out in the Guardian:

Out of breath? He has also broken an electoral reform promise, initiated a privatization scheme that is a massive corporate handout, left un-repealed a Tory political spy bill, launched air strikes in Iraq and Syria despite pledging a withdrawal, and inked the largest-ever weapons deal with the brutal, misogynistic Saudi Arabian regime.

Klein, meanwhile, has previously compared Trudeau to Barack Obama, calling them both “masters of co-opting progressive imagery”. Indeed, Obama won a top marketing award from the advertising industry back in 2008.

The Canary was in attendance as Klein joined Jeremy Corbyn and Owen Jones in speaking at the event on 23 September. Grassroots campaign group Momentum is behind The World Transformed, a four-day festival of ideas that happened alongside the Labour Party’s 2018 conference in Liverpool.

Like failed US presidential candidate Hillary Clinton, Trudeau comes from a political dynasty. His father, Pierre, was the 15th prime minister of Canada. These pseudo-progressives grandstand against the far right in an attempt to paint themselves as architects of actual change. But in reality, Clinton initially schemed to elevate Trump’s profile during the last US presidential battle in order to make her platform look more progressive.

As Klein points out, these people are oligarchs in progressive clothing. They are enemies of the change we need.