Theresa May’s DUP allies are under fire again. But they're still propping up her government. - Canary 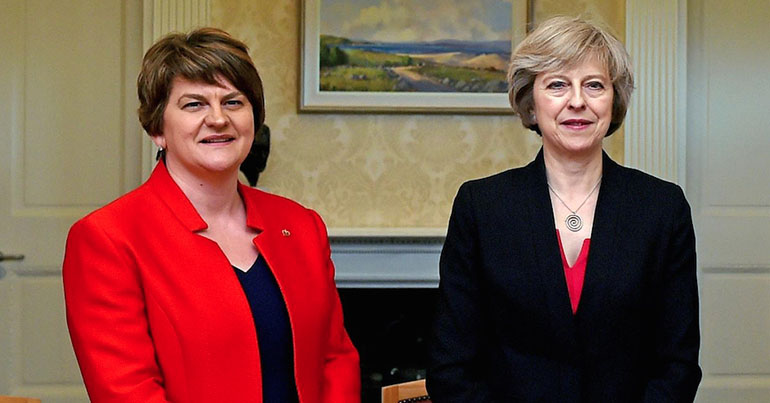 Following his suspension from the House of Commons for dishonesty, DUP MP Ian Paisley has avoided an embarrassing by-election by just 444 votes. But there’s more trouble on the way. The Electoral Commission is investigating money paid to sponsor a table at an event Paisley hosted.

Worse still, his party leader Arlene Foster has given evidence to an inquiry. She had to answer why an overspend could possibly leave the Northern Ireland taxpayer with a £700m bill. But still, Theresa May continues to work with the DUP in government.

Paisley faced a possible by-election after failing to declare two family holidays – which the Sri Lankan government paid for – in 2013. But because less than 10% of his constituents signed a petition to unseat him, he escaped the embarrassment.

He’s not out of the woods yet

But his troubles aren’t over. The Northern Ireland Auditor’s Office is also investigating payments made by local councils for an event Paisley invited them to attend. The councils made the payments with ratepayers’ money.

Secretary for the environment Michael Gove attended the same event, which some believed to be a DUP fundraiser. Gove later apologised for attending.

Arlene Foster at the inquiry

DUP leader Foster has problems of her own. On 25 September, she had to answer to the Renewable Heat Incentive (RHI) inquiry. This inquiry is investigating the circumstances surrounding a seriously flawed energy initiative in Northern Ireland. The costs of the scheme spiralled out of control.

Alleged abuse of this initiative was flagged with Arlene Foster’s department as far back as 2013. The scheme still continued. This scandal then played a significant role in the collapse of Northern Ireland’s government in January 2017. There has been no government in Northern Ireland since then.

Not fit to govern

As May clearly enjoys the company of strange bedfellows, it should come as no surprise she’s still in cahoots with the DUP. One silver lining is that Paisley’s suspension continues until 4 October. May is now minus one for all crucial votes.

With May clinging to power by a thread, she needs every DUP vote she can muster. But the British people deserve better, and should not have to tolerate such low standards in government.