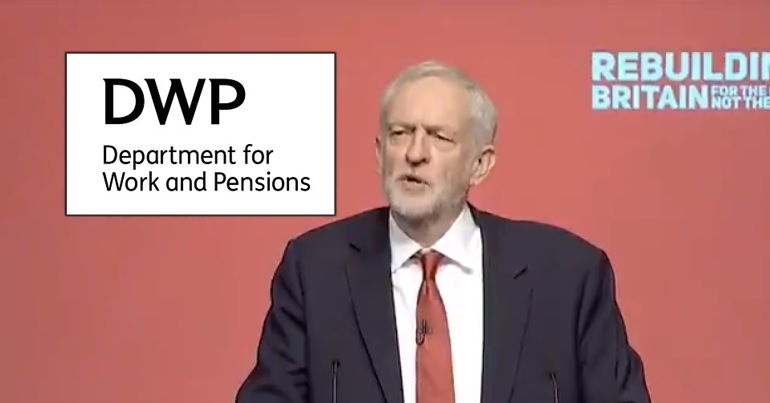 Jeremy Corbyn’s speech at the 2018 Labour Party conference gives hope for change at the scandal-ridden Department for Work and Pensions (DWP). And change at the DWP, as too many disabled people in Britain know, couldn’t come soon enough.

Corbyn spoke out about the “hostile environment” that the ruling Conservative Party has created for disabled people through its changes at the DWP in recent years. And he revealed that:

Hundreds of people from all over the country write to me about it every week.

One woman with progressive multiple sclerosis, for example, had her benefits stopped; and her husband was so distressed by the “very cruel” situation that he himself had to start taking anti-depressants. Corbyn stressed that:

These are human consequences of a Tory government that puts tax cuts for the wealthy ahead of care for the disabled people of our society.

And he promised an alternative from Labour, tweeting:

We’re ready to bring humanity back into the heart of our government.

We're ready to bring humanity back into the heart of our government.

Since 2016, the UN has released numerous reports criticising the Conservative-led government and its DWP. As The Canary has reported in detail, all have been scathing in their criticism. One in particular said there had been “grave” and “systematic” violations of disabled people’s human rights – leading to a “human catastrophe”. It also accused the government of trying to misrepresent this situation through “unanswered questions”, “misused statistics”, and a “smoke screen of statements”.

The UN, meanwhile, is still receiving numerous complaints about the DWP. And its special rapporteur on extreme poverty and human rights, Prof Philip Alston, will be coming to the UK in November on a fact-finding mission – during which the DWP looks set to come under yet more scrutiny.

The Canary‘s Steve Topple, whose work focuses on the DWP, has previously exposed Labour’s shortcomings when it comes to holding the Conservative-led government to account for the immense suffering it has been causing via its changes to the welfare system. He suggests that ordinary Labour members have been doing more than MPs to support disabled people. And he recently criticised Labour for scuppering a debate on Universal Credit at its 2018 conference.

He’s right. Labour needs to do better. It needs to show its support for disabled people a lot more often and more effectively. But Corbyn’s conference speech appears to send a clear and simple message to all the people suffering at the hands of the Tory-led DWP: I hear you, and I care. And the sooner his pledge to “bring humanity back” to government comes to fruition, the better.

– Support the blogs Universal Credit Sufferer and The Poor Side of Life. Also, follow I was a JSA claimant, BENEFITS NEWS and Paula Peters on Twitter. And support Disabled People Against Cuts (DPAC).