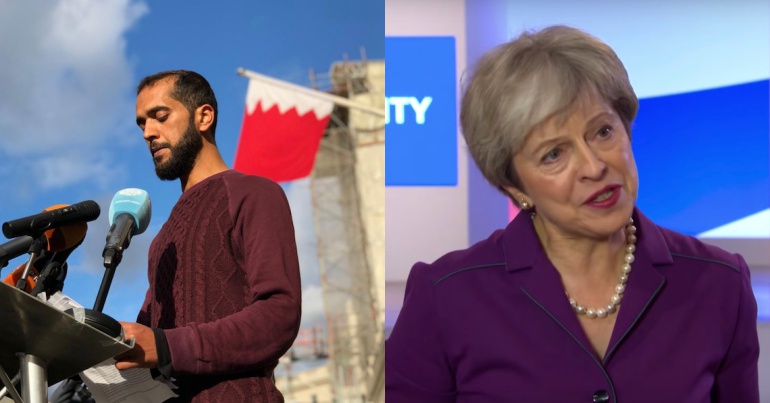 On 2 October, Bahraini activist Ali Mushaima ended a 63-day protest outside the Bahrain embassy in London. He was opposing the brutal treatment of his father – Hassan – in a Bahraini prison. For the first 44 days of his protest, Ali was on a full hunger strike. After that, he continued his sit-in outside the embassy. Ali lost 16 kilos since starting his protest.

Ali’s protest also exposes yet again the complicity of Theresa May’s government in Bahrain’s crimes, as the UK has sent the dictatorship millions of pounds’ worth of arms in recent years.

“I fear for my father’s life”

As he ended his protest, a press release quoted Ali as saying:

My personal experience with the Bahraini regime is not only through its criminal treatment of my father, the first time I was arrested and tortured I was only fifteen years old, it is something one never forgets.

He also explained why he took action:

I came out here because I fear for my father’s life, and I will continue fighting to save his life. As a result of my protest and hunger strike, I have many people helping me. That is why I see my protest as a success, not because it exposed how horrible the Bahraini regime and its allies can be, but because it showed me the good in all those who support justice.

The Bahrain Institute for Rights and Democracy (BIRD), which advocates for human rights in Bahrain, shared images of his speech:

.@AMushaima now at the @BahrainEmbUK: "The first time I was arrested&tortured I was only 15 years old. Despite that experience, I decided to be hopeful, that the regime would care about getting bad publicity, and this would put pressure on them to better my father's conditions". pic.twitter.com/3wI0TNsR4J

Ali chose to end the protest because it had raised public awareness about his father and other political prisoners in Bahrain. SNP Westminster leader Ian Blackford called on the government to demand Hassan Mushaima’s release. Labour MP Andy Slaughter, Liberal Democrat foreign affairs spokesperson Christine Jardine, and former co-leaders of the Green Party Caroline Lucas and Jonathan Bartley are among 15 MPs who pledged to support Ali.

.@AMushaima now at the @BahrainEmbUK: "15 MPs have vowed that they will follow my father's case through all available means…I am deeply touched… this makes me feel that instead of me protesting for my father, that my father now has 15 people fighting for him in parliament." pic.twitter.com/o3mtDtsFK0

But sadly, the situation for many in Bahrain is still dangerous:

.@AMushaima now outside the @BahrainEmbUK: "I thank everyone for their support… I am looking forward to being home, to playing with my daughter and watching her fall asleep in my arms. Sadly, for many political prisoners in #Bahrain that is something they can only dream of." pic.twitter.com/DV9WALpEzr

Hassan Mushaima suffers from a range of complex medical issues. Yet he’s deprived of vital medical care, family visits and access to books. Amnesty International has condemned the treatment of Hassan and three other elderly prisoners. It said that “cruel, inhuman and degrading treatment” put their “lives at risk”.

Ali wrote to the Foreign and Commonwealth Office (FCO), and also to the Queen – asking her to use her close friendship with the King of Bahrain to help him save his father. Yet FCO minister Alistair Burt has reportedly refused to even meet Ali.

Since June 2016, Bahrain has rapidly deteriorated into a full-blown human rights crisis.

And Human Rights Watch has warned that the situation is getting worse. But despite ongoing repression and human rights abuses in Bahrain, the UK continues to arm and support the regime.

According to Campaign Against Arms Trade (CAAT), the UK has licensed at least £82m worth of arms to Bahrain’s dictatorship since the country’s February 2011 ‘Arab Spring’ uprising. CAAT also says:

CAAT’s Andrew Smith, meanwhile, insisted in a press release that:

The UK government should not be arming and supporting the Bahraini dictatorship. Theresa May and her colleagues have been complicit in the appalling treatment of Hassan Mushaima and other political prisoners in Bahrain. We are always being told that the UK stands for human rights and democracy around the world. It is time for them to listen, prioritise human rights, and end the arms sales.

Ali’s protest has been key in bringing Bahrain to the foreground again. And as Sayed Ahmed Alwadaei, director of advocacy at BIRD, explained in a press release:

During the past two months, Ali has demonstrated outstanding bravery as he was able to shed light on the horrific treatment his father and all political prisoners are subjected to in Bahrain. Now it is time for members of the British Parliament to halt the British complicity and hold Ministers to account for their toxic relation with Bahrain.

The hunger strike and protest is now over. But it’s vital that it is not forgotten. Hassan – and all other political prisoners – deserve freedom; so our government must act to support them. Equally importantly, British arms sales to Bahrain must stop. And we can all play a part in making that happen.

– Support CAAT, and find out more about the arms trade.

– Read more articles from The Canary about Bahrain.