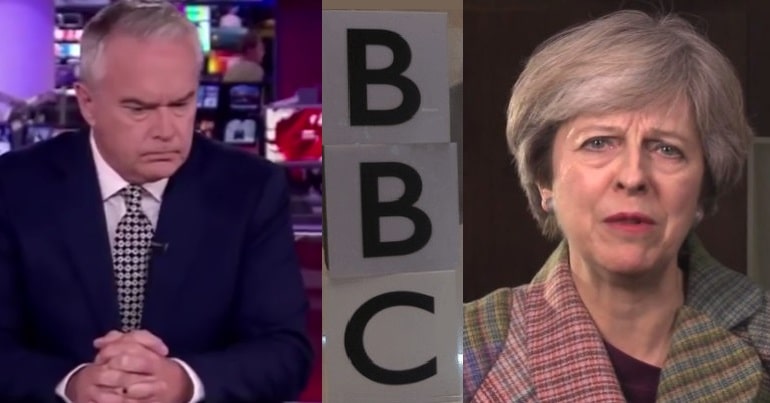 Even the BBC has turned on Theresa May after she blocked media access to her at the Conservative conference. Representatives from the BBC and other broadcasters compared May to Donald Trump after she refused several interviews.

In a letter to May’s communications chief, broadcasters called the lack of access to the prime minister “unprecedented”. And Channel 4′s Jon Snow expanded on how May is breaking from procedure:

Thatcher, Major, Blair, Brown, Cameron, May. For 29 years at @Channel4News I have interviewed the @10DowningStreet Prime Minister of the day at their party conference – until today. @theresa_may has refused to appear on @Channel4News tonight; unprecedented & disappointing pic.twitter.com/jIc0FSN8Kg

For 29 years I’ve been anchoring Channel 4 News’s coverage at the party conferences. And at every party conference we’ve had access to the leader of the day, from Mrs Thatcher through Tony Blair… right up to the present day… But this year, after weeks of negotiating… she has steadfastly refused to speak to Channel 4 News. Public service broadcasting depends on access to the politicians of the day to maintain a healthy democracy.

Meanwhile, representatives from the BBC, Sky News, ITV, ITN, Channel 4 and Channel 5 pointed out that politicians receive “blanket coverage” for their conference speeches. The news stations say that they must face questions in return:

For a functioning democracy it is vital that in turn the politicians and in particular the leaders and even Prime Ministers are also questioned and held to account in one-to-one interviews.

They demanded that May come forward and face questioning. And the prime minister’s head of communications wrote back:

It is not possible for the Prime Minister to accept interview bids from every programme.

However the BBC, Sky and ITN have had many opportunities throughout this week to cross examine the Prime Minister. We make other senior ministers available more widely.

“Locked in a room and banned from filming”

The thing is, the prime minister has a history of hiding from even the establishment media. Sky News deputy political editor Beth Rigby described May’s 2017 general election campaign as “the most controlled” she’d ever seen.

When May visited Cornwall during the election, for example, local paper Cornwall Live reported:

Then there’s Harrow, London, where the prime minister reportedly refused to take questions from anyone other than handpicked journalists. They were allowed to ask six questions in total. And as the Guardian pointed out, even this was “rather generous by the standard of these events”.

At the time, Channel 4′s Michael Crick suggested that sections of the media didn’t actually seem too bothered as long as they got interview ratings. Crick said that:

What shocks me is reporters collaborate with May press team by agreeing to reveal their questions to them in advance… Only pre-arranged journalists get questions at May events.

May has ducked many interviews because she simply cannot defend the Conservative record. Now even the BBC, which is close to the government, has compared her lack of accountability to Trump. The ‘safe pair of hands’ image of the prime minister was always a mirage. If May can’t even face the corporate press, it’s time to stand aside.