The world just got a glimpse of what young Tories are into. Yes, that is a Hitler moustache. - Canary 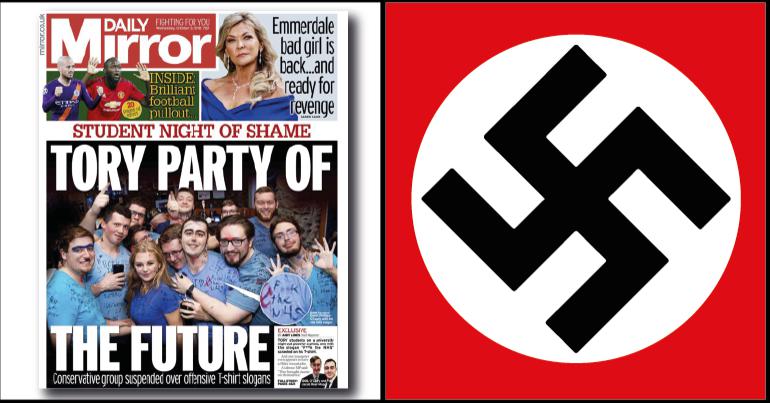 A senior Tory once labelled the Labour activist group Momentum as ‘neo-fascists’. As the Conservative Party Conference went into full swing, the country got to see some Tory activists. If Tories thought Momentum were fascists for pursuing mild, social democracy, they must think even worse of this lot. Because yes, that is a Hitler moustache you’re looking at:

These Tories with a Hitler moustache and t-shirts scrawled with 'ENOCH WAS RIGHT' and 'FUCK THE NHS' are the sorts of activists who will decide who the next Tory Prime Minister is pic.twitter.com/KzF6CilZBp

The Mirror reported that members of the Plymouth University Conservatives were pictured on a night out at the start of the academic year. They’d scrawled messages all over themselves which were unpleasant at best, and aggressively racist at worst.

The one that stood out for many people was ‘Fuck the NHS’ besides a Soviet hammer and sickle. Although the Tories have, to put it mildly, ‘fucked the NHS’, they don’t normally admit to doing so. Largely because the NHS is very popular among people who need it to live. The weirdest thing here is how honest the young Tory was being.

It got worse, though. One of them referenced Enoch Powell, the former Tory MP who was too racist for even the 1960s Tory Party. Another had the word ‘Jude’ written on them – German for ‘Jew’ – as well as the Star of David. The one holding two hands up as if saying ‘OK’ is actually believed to be making a white power gesture. This is a more exaggerated version of the ‘OK’ gesture in which the three extended fingers stand for ‘W’ and downward palm for the ‘P’ – i.e. ‘white power’. 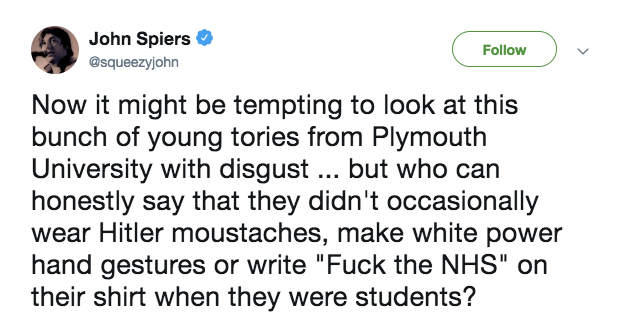 There’s no doubt that some of those pictured were members of the Conservative Party. The Mirror has images of some of them taking pictures with Boris Johnson and Jacob Rees-Mogg. A spokesperson for the party said:

We are investigating and will suspend those people identified as members of the party.

This is to be expected. The Conservatives can’t have members going around being honest about the party’s intentions for the NHS.

People on social media have also commented on the incident:

It’s always been obvious why Tories like to call Momentum ‘fascists’. It’s the classic schoolyard bully trick of saying “I know you are, but what am I?”. This image shows this tactic up for the cynical ploy that it is.

Featured image via The Mirror