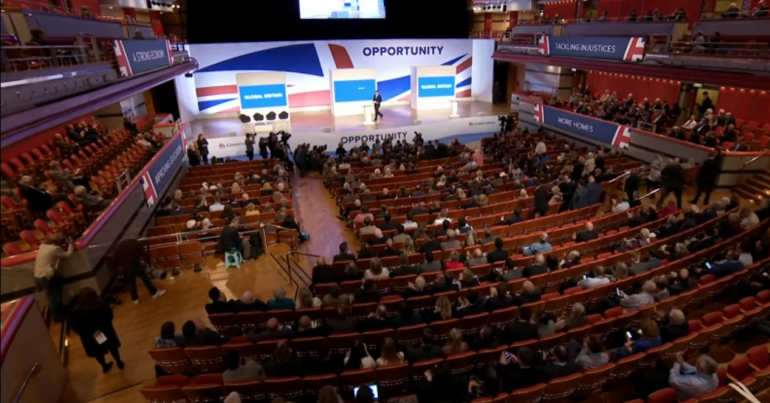 For all the wrong reasons, the 2018 Conservative Party Conference has been one of the most memorable yet. Here are some of this year’s worst (best) absolute meltdowns.

The Conservative Party conference got off to a horrible start. A massive flaw in the conference’s official mobile phone application meant that “the data of hundreds of attendees […] could be viewed by second guessing attendees’ email addresses”.

The personal information and phone numbers of Boris Johnson, Michael Gove, Gavin Williamson, and others were made accessible, causing outrage.

The Tories are blaming the almighty app cock up on the private company they outsourced it to. So have they finally learned that outsourcing to the private sector is a very bad idea?

And Momentum kindly offered to help the Conservatives avoid any future embarrassment:

???@PeoplesMomentum have offered to help the Tories make a conference app next year that doesn’t give out every government minister’s personal phone numbers??? pic.twitter.com/cPYNqGr8qT

The Canary recently reported that the Conservative Party “now earns more from dead supporters than it does from the living.” The party is officially a ‘zombie party’ – and its conference has often looked like a ghost town.

This is the picture as Jeremy Hunt completes his speech. A half empty hall. Utterly embarrassing.

Where would the Tories be without their powerful friends in the print media, constantly spinning for them and pumping out propaganda daily?

And Jeremy Wright, secretary of state for digital, culture, media and sport, wasn’t even close:

Looking at the size of the audience, you would assume that #jeremywright was speaking at 3 Am to #Conservatives2018 rather than during the day. pic.twitter.com/7qH6J5sgcG

The Tory party is dying, and it’s all on live television.

During his conference speech, Hunt compared the European Union (EU) to the Soviet Union:

It was the Soviet Union that stopped people leaving. And the lesson from history is clear: if you turn the EU club into a prison, the desire to get out of it won’t diminish – it will grow.

I would say respectfully that we would all benefit – and in particular foreign affairs ministers – from opening a history book from time to time.

Vytenis Andriukaitis, a member of the EU commission, wrote:

Dear @Jeremy_Hunt
I was born in Soviet gulag and been imprisoned by KGB a few times in my life.
Happy to brief you on the main differences between #EU and Soviet Union. And also why we escaped the #USSR
Anytime. Whatever helps. https://t.co/c2h7gbnj59

And Nigel Farage showed that the Tories are now on the same page as UKIP:

Jeremy Hunt is using my language, the EU is the new Soviet Union.

Jacob Rees-Mogg referred to the Great Socialist People’s Libyan Arab Jamahiriya, now Libya, as “the people’s republic of jam jar or something”. His comments are reminiscent of Boris Johnson’s description of Black people as “piccaninnies” with “watermelon smiles” – and reflective of a deep racism within the Conservative Party.

Rees-Mogg voted for military intervention in Libya in 2011. Seven years later, the country “is extremely fractured and a source of regional instability.” Ash Sarkar, senior editor at Novara Media, responded:

Can’t decide if the most disgusting thing about Britain is Coronation Chicken, or our ruling class’ habit of pretending they don’t know the names of countries we’ve bombed the shit out of. https://t.co/b6pUn99NB5

Rees-Mogg’s comments seem a blatant attempt to both appeal to the far right and trigger anti-racism campaigners into giving him greater exposure.

5. The party of ‘opportunity’

During the conference, the Conservatives focused on being the party of “opportunity“. At the conference’s venue, however, a doorway to opportunity was literally restricted. With a metaphor like this, the satire writes itself:

A perfect metaphor has been installed at Tory Party Conference: A doorway to opportunity that is accessible for the few and inaccessible for the many because of a blue hard border.#CPC18 pic.twitter.com/03edQapMIb

6. The party of ‘technology’

The Conservatives emphasised the importance of technology in a post-Brexit world, while demonstrating complete technological incompetence.

They also failed to master the technological labyrinth of pinning letters to a wall:

The Conservatives, moreover, have clearly not learnt about using a background that can be used as a ‘blue screen’:

The Conservative Party’s divisions over Brexit unravelled after one party activist gave ‘Chuck Chequers’ badges to other conference-goers:

This is gonna be a cracking few days pic.twitter.com/8BTuMgLLRT

The Tory party’s fringe meeting on how to win back the under-45s was… largely absent of people under 45.

The Tories are abjectly failing young people, and they’re paying the price for it. According to data collected from YouGov, if only 18 to 24-year-olds could vote, the Tories wouldn’t win a single seat in a general election:

How the next general election would look if only 18-24s were allowed to vote (Data from @YouGov, 28-29th August). I'm expecting some great GIFs, everyone…

9. More protesters outside the Conservative Party conference than inside?

While seats within the conference were left empty, thousands of anti-austerity and anti-Brexit protesters rallied in Manchester and Birmingham:

Thousands of people being so #DeeplyUnhelpful in Birmingham today at #CPC18 It seems they want to #BinBrexit @birmingham_live #marr pic.twitter.com/lrzg0tXaNs

And Nadine Dorries, Conservative MP for Mid Bedfordshire, managed to embarrass her party further. On Twitter, she claimed:

You will never see Conservatives protesting outside a Labour conference. We believe in free speech and democracy. https://t.co/57dz0fm9t3

Dorries had seemingly forgotten that the right to protest, free speech, and democracy are not mutually exclusive.

The Cayman Islands are well-known to be a tax haven for the super-rich. In the words of John McDonnell:

They said in the General Election I had a magic money tree. Well I found it, it’s in the Cayman Islands.

Is it any surprise that the Cayman Islands, as in past years, have a stall at the Conservative Party conference?

After this conference meltdown, the Conservatives have exposed themselves as unpopular, incompetent, and out of ideas. And it isn’t even over yet.