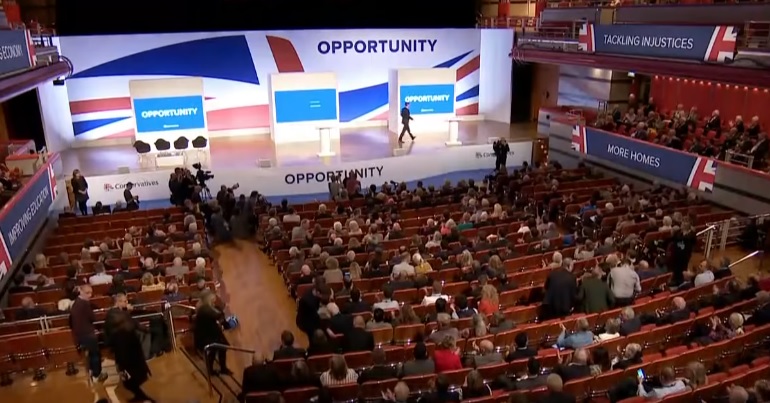 The Conservatives shared news of a ‘historic’ UK military operation at the party’s 2018 conference. But it happened during quite a dull speech on 30 September. So the alarming revelation has barely raised an eyebrow in the UK.

Defence secretary Gavin Williamson addressed conference on 30 September. He spoke about how the Ministry of Defence (MoD) is promoting the idea of “Global Britain” with its actions around the world. And he also shared a recent military ‘achievement’ with the audience, saying:

For the first time this week, state-of-the-art lightning jet fighters took off from the deck of HMS Queen Elizabeth, the world’s most advanced aircraft carrier.

Williamson didn’t elaborate on the operation further, allowing the news to pass with just a round of half-hearted applause. But he had expanded on it a couple of days earlier when the government posted news of its “historic” move on its website. The MoD explained:

The first landings and take-offs from HMS Queen Elizabeth are the culmination of a national endeavour lasting more than a decade to bring an aircraft carrier back to the UK’s arsenal.

The MoD also confirmed that this is the beginning of “more than half-a-century of ‘Carrier Strike’ operations”. The defence secretary laid out in layman’s terms what it means. He said:

This marks a rebirth of our power to strike decisively from the seas anywhere in the world.

Then, without a shred of irony, Williamson added that the operation is more than a “monumental moment”:

It is also a statement of Britain’s determination to promote peace and prevent war.

For many people, the idea that the UK is planning to “promote peace and prevent war” by ensuring it has the power to strike “anywhere in the world” will seem like a contradiction in terms. And that’s because it is. In the world of George Orwell’s infamous novel 1984, people are expected to exercise “doublethink”, whereby they – at the same time and without question – believe in contradictory ideas. One prime example of it exists in a slogan of the ruling party: “War is Peace”. That’s what Williamson is selling us.

The defence secretary shared a further couple of ‘peacekeeping’ plans that the UK has (more doublethink required):

So although Williamson’s conference speech wasn’t particularly exhilarating or well publicised, it did contain a number of alarming revelations. And it certainly will have confirmed suspicions that people in power don’t view 1984 as a warning. Rather, they’re using it as an instruction manual.

– Take part in the Twitterstorm at 19.45 to #GetTheToriesOut.