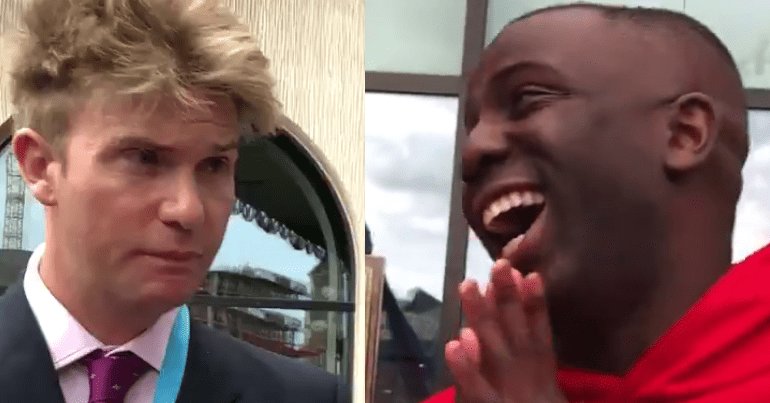 Outside the Conservative Party conference in Birmingham, anti-Brexit campaigner Femi Oluwole was interviewing a young Conservative about his views on the EU.

Until the young Tory fell on his own sword:

MUST WATCH!
Brexiteer tells @Femi_Sorry that the EU forces uncontrolled and harmful immigration on the United Kingdom. You can guess what happened next! #CPC18 "Sajid Javid" pic.twitter.com/qKekxYYyIu

We are allowing vast numbers of people from Eastern Europe to come here, that cost us money. Immigrants have to benefit a country, not be a burden on the country

So what if we had a situation where in order to come to this country you needed to either have a job and therefore be contributing to the economy, or have your own medical insurance and have enough money that you would not be a burden?

That is literally EU law.

The face palm debate over immigration

Under EU law, the Conservative government can send EU nationals back to their own country once they are in the UK for over three months, if they cannot demonstrate employment or cannot support themselves.

And that’s before you get to a recent study from Oxford Economics. Carrying out research for the government, Oxford Economics found that EU immigrants actually contribute net £2,300 more annually to the government’s coffers than British nationals. Spin that over a lifetime, and EU immigrants bring in £78,000 more than they take out from public services and welfare. Whereas, British nationals average out at zero.

It’s worth noting that even presenting the debate in such economic terms could be a concession. It means that we are valuing people based on their economic worth, rather than on cultural, artistic and humane values.

Still, watching an arrogant young Tory fall on his own sword is comedy gold. More please.