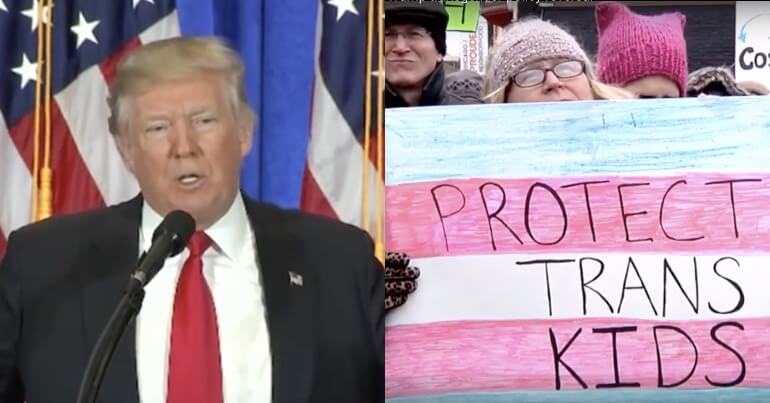 Donald Trump wants to legally change the definition of ‘sex’, potentially putting an end to the legal recognition of transgender Americans. According to the New York Times, a leaked government memo revealed plans to narrow the definition.

The leaked memo reportedly comes from the Department of Health and Human Services (HHS). The memo outlines plans to “establish a legal definition of sex” under Title IX. Title IX is a federal civil rights law that bans discrimination based on a person’s gender.

The memo says gender should be determined “on a biological basis that is clear, grounded in science, objective and administrable”. However, the HHS wants the definition of gender to be strictly either male or female. It also states that someone’s identification as a male or female can only be determined by the genitals they are born with:

The sex listed on a person’s birth certificate, as originally issued, shall constitute definitive proof of a person’s sex unless rebutted by reliable genetic evidence

The memo doesn’t even begin to address the rights and needs of intersex people. Intersex people’s biological sex is not as clearly rooted in typical male or female biology as most people’s is. This means they are often forced into a distinctly male or a female role based only on which of the binary sexes they most closely resemble – or can be surgically altered to resemble – at birth.

Trump would be reversing Obama-era policy and guidance which helped recognise transgender students under existing federal law. This isn’t Trump’s first attack on the community, though.

In August 2017, Trump tried to ban all transgender Americans from military service. However, federal judges blocked the blanket ban. Despite this, Trump has since signed a new memorandum banning certain transgender individuals from serving in the military.

Trump also rescinded Obama-era guidance that allowed transgender schoolchildren to use bathrooms that aligned with their gender identity.

The memo has been condemned by LGBTQ groups. The Trevor Project, a suicide prevention service for LGBTQ youth, described the proposals as “reckless and dangerous”. CEO Amit Paley argues:

When a young person hears that their existence and gender identity will not be recognized by their government, they hear that they are not worthy to be a part of that nation

The Human Rights Campaign, an LGBTQ civil rights group, also described the move as a “direct attack on the fundamental equality of LGBTQ people”.

Trans and intersex people also took to Twitter to express their anger at the memo:

I FUCKING EXIST. My name is Mari. I’m a writer, an academic, a performer, and medical professional. I literally save people’s lives for a living. I have a Master’s degree. I’m a published scientist. I AM A QUEER TRANS WOMAN AND I WILL NOT BE FUCKING ERASED. #TransPeopleAreReal pic.twitter.com/HnRQgT9fUP

In this case, this is an attack on both MY existence(as intersexed) and on Trans Existence directly! I felt compelled to write about being born Non Binary. #WontBeErased This horror affects me directly and I stand both for my intersex .2% and for my Trans siblings! pic.twitter.com/vU5lpmf1Bw

The new regulations would ultimately remove civil rights and non-discrimination protections for all 1.4 million transgender Americans, in a deeply worrying step backwards. This will hit trans people already facing discrimination based on ethnicity, disability, and sexual orientation even harder.

This is the reality of Trump’s America. But with 15 days to go before the mid-term elections, this might just ignite the backlash needed to take control away from Trump’s Republicans.

– Support The Trevor Project and The Human Rights Campaign