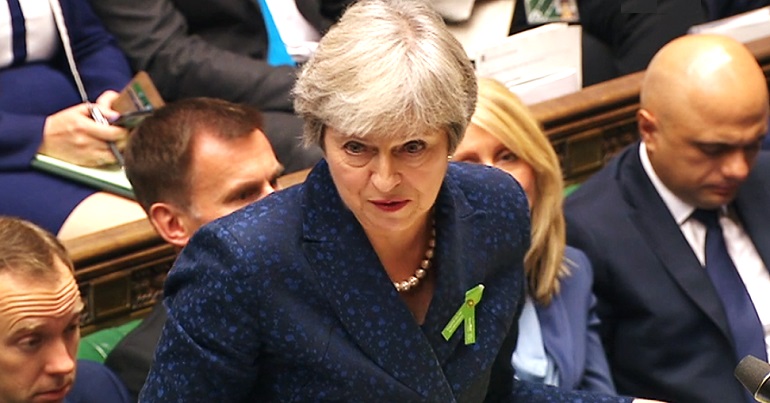 An anonymous Tory MP has made violent remarks about prime minister Theresa May. And an outpouring of disgust and condemnation from all sides has followed.

Robert Shrimsley of the Financial Times tweeted the comments from 21 October’s Sunday Times:

Tory MP on May in SunTimes: "The moment is coming when the knife gets heated, stuck in her front and twisted. She'll be dead soon". What kind of person talks like this?

These weren’t the words of an angry Brexiteer keyboard warrior, but an anonymous Conservative MP describing a coup fantasy.

According to the Guardian, other unnamed MPs also said May was entering “the killing zone”, that “assassination is in the air”, and that she should “bring her own noose” when meeting unhappy backbench colleagues.

Unsurprisingly, condemnation across the political spectrum has been fierce. Shadow home secretary Diane Abbott – who knows more than most about violent abuse – was quick to respond:

Horrible, violent, abusive language by Tory MPs about their Prime Minister. Isn’t it any wonder that keyboard warriors on Twitter and elsewhere take it to another level?

“The moment is coming when the knife gets heated, stuck in her front and twisted. She’ll be dead soon” pic.twitter.com/efSPZ2umJI

And now we have at least one colleague who think it’s ok to talk in terms of assassinating our Party Leader. This is not healthy politics. I do say that we can get back together & move forward – but we will all need to make a huge collective effort to do so https://t.co/v0YHHhSveC

So too did Anna Soubry, who criticised colleague Mark Francois for failing to clearly condemn the remarks on BBC Radio 4. Although describing the comments as “unacceptable”, he seemed to partly excuse them as being born of “frustration” with government Brexit policy.

I am appalled that my colleague #MarkFrancoisMP failed unequivocally to condemn the disgraceful and dangerous language used by a fellow Conservative MP against the PM @BBCr4today he even tried to excuse it. Shameful.

Others were less measured and came out swinging:

Shame on the spineless cowards on my benches who hide behind anonymity to use such disturbing & violent language about their own colleague & PM @theresa_may Totally unacceptable. Have they learned nothing following the assassination of Jo Cox?

There are those who claim that these statements are just creative uses of language. Similar arguments were put forward when Chuka Umunna said Jeremy Corbyn should “call off the dogs” when referring to supporters of Labour leader Jeremy Corbyn.

But the language in this case is particularly vicious. It is also used in a context where, in recent memory, Jo Cox was literally stabbed to death. And it comes amid endemic violence against women in society and soaring knife crime.

Do the Tories have a problem with violent language?

The Tories seem to have a problem with the casual use of violent language. Only recently, former foreign secretary Boris Johnson described Theresa May’s Chequers deal as a “suicide vest”. This at a time when Britain has suffered numerous acts of terror in recent years. Tory MP Sir Alan Duncan called this incident:

one of the most disgusting moments in modern British politics

But the Labour Party has had its own problems with this in the recent past too. Corbyn sceptic Jess Phillips, for example, infamously told Owen Jones that:

Labour MP Yvette Cooper has proposed identifying and exposing the source of the controversial quotes to deter others from using similar language.

Tory MP Heidi Allen didn’t pull her punches either. Speaking on BBC Politics Live, she said those who made the comments should have the whip removed and be “thrown out the party”.

"For me it is worthy of having the whip removed and being thrown out of the party" @heidiallen75 on MPs abusing the PM #PoliticsLive https://t.co/vC4jfRTzQH pic.twitter.com/BrQGy8bY87

This incident is yet another example of the nasty underbelly of a crumbling Conservative Party. As it becomes increasingly desperate, that underbelly is becoming increasingly visible. Only last week, for example, Conservative home secretary Sajid Javid thought it entirely acceptable to post an EDL-esque tweet about “sick Asian paedophiles”.

This incident again highlights the shameful hypocrisy of a party which attempts to demonise Labour members, Momentum, and Corbyn supporters as ‘bullies’, ‘thugs’ and even ‘neofascists‘, while it panders to racists and appears to incite violence against its own leader.