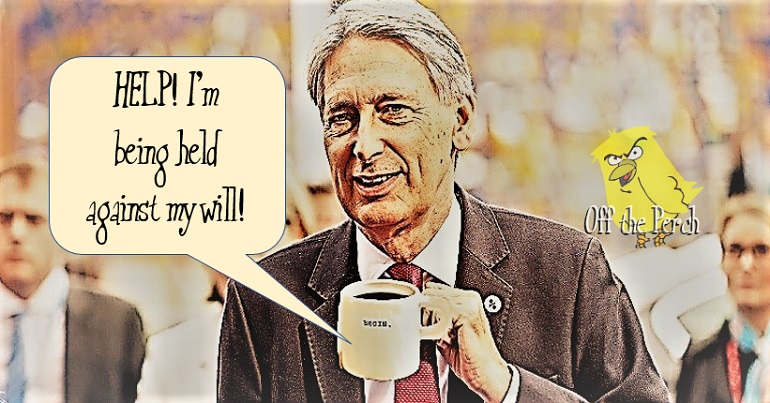 A coffee cup has reportedly been left traumatised after the government forced it to have “Philip Hammond” painted onto it.

As the Mirror‘s chief chinaware correspondent Dan Bloom tweeted that, ahead of the Autumn Budget, chancellor Hammond had been parading his ugly mug… sorry, correction… parading A mug with his name on it:

It’s been rumoured that Hammond took the decision to violate the coffee cup due to his repeated pinching of himself since Theresa May gave him the job of chancellor. Sources close to Hammond allegedly said:

He can’t believe he’s in charge of all this money. His nanny still doesn’t let him buy his own Freddos – she has to count the change out with him when he pays for them in his local Costcutter.

But in an exclusive interview with Off The Perch, the coffee cup embroiled in the scandal has spoken out.

‘Olga’ (Off The Perch has changed the cup’s name to protect its identity) said it was snatched from its local Wilko’s in the early hours of Sunday 28 October. Gagged, and with a sack placed over its rim, unknown assailants took it to an undisclosed location.

“I was terrified,” said Olga. “I thought I’d end up being used to soak paintbrushes in white spirit; or worse, end up in a garage with spare screws, nuts, and bolts in me.” But Olga told Off The Perch that the reality was far more dire:

The men tied my handle with draft Universal Credit press releases. I heard one of them mutter ‘We’ve got so many of the fucking things we may as well use them up…’

Then, the overpowering smell of oil paint began to seep into my pores. I passed out after that. It was all too much.

Olga awoke to find that these vicious thugs had painted the words “Philip Hammond” and “Chancellor” all over it.

But things got worse.

A spotty, sweaty student (whom Olga believes was from Eton) whisked it away in the early hours of Monday 29 October. The next thing Olga knew, it was in the chancellor’s office:

He came at me like a madman. His eyes were bulging; he kept licking his lips and rubbing his hands together. Then running them somewhere else. Sweat was dripping off his upper lip. I was so scared.

The details of what happened next are too explicit for Off The Perch to publish. But suffice to say, it was all caught on camera:

Philip Hammond appears to have his own "Chancellor" coffee mug. pic.twitter.com/Ndy7UWhwK0

Hammond: what a mug

Olga was then dumped in a bin, where a brave Daily Sport writer found it. It will be having therapy to get over the shock of these horrific events.

“I’m not sure how I’ll recover,” Olga said. “But one thing is certain. This mug will never be taken for a mug by a mug again.”